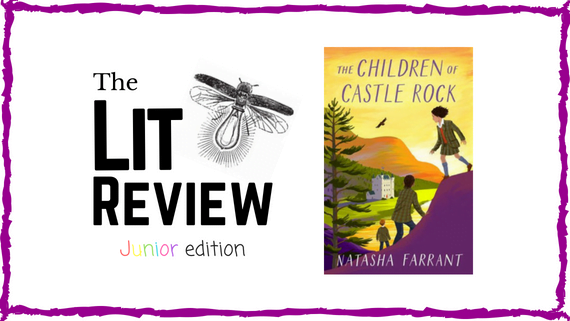 Who: Natasha Farrant has worked in children’s publishing for almost 20 years, running her own literary scouting agency for the past 10. She is the author of the Carnegie-longlisted and Branford Boase-shortlisted YA historical novel, The Things We Did For Love, as well as two successful adult novels. Farrant was shortlisted for the Queen of Teen Award 2014, and the second Bluebell Gadbsy book, Flora in Love, is longlisted for the Guardian Children’s Prize. The Children of Castle Rock is her latest novel for young readers.

What: Following her mother’s untimely death, 11-year-old Alice Mistlethwaite is sent off to Stormy Loch Academy, a boarding school in Scotland. Understandably, Alice dreads the move but soon finds that the school is nothing like she had imagined. Run by the mysterious Major, there are no punishments — only Consequences — and students are more likely to be taught about body painting or extreme survival than maths or English. Alice soon finds her place in Stormy Loch and friends in Fergus and Jesse.

One day, her father sends her a mysterious package with instructions to keep it secret. He then follows this up with a note to meet him at the castle on the Isle of Nish with the package. Alice enlists her friends’ help in making the long journey there, and so begins an epic quest across wild Scottish highlands and islands where friendships are tested, lies untangled, and danger and excitement abound at every turn.

Why: Natasha Farrant has written a riveting adventure story with all the elements that is sure to make this an enduring favourite among young readers. Told with sparkling prose, the story boasts a cast of interesting and endearing characters, thrilling developments at various turns, and a good mystery to boot. It’s all rollicking good fun.

But that is not all — the story also has emotional depth. It starts off on a melancholic note, where we find Alice having to say goodbye to the only home she ever knew, and one in which is full of warm memories of time spent with her late mother. Farrant tackles the subject of dealing with the death of a parent with sensitivity and authenticity, without getting maudlin about it. Alice’s story is essentially an empowering one — we see her gradually find her own sense of self and independence, but most of all, she learns that life does go on despite tragedy and disappointments and that it can be beautiful once again.

Best/Worst Line: “Stories end, darling, and that’s sad, but they have to so new ones can begin.”

Reading Level: Aged 10 and up