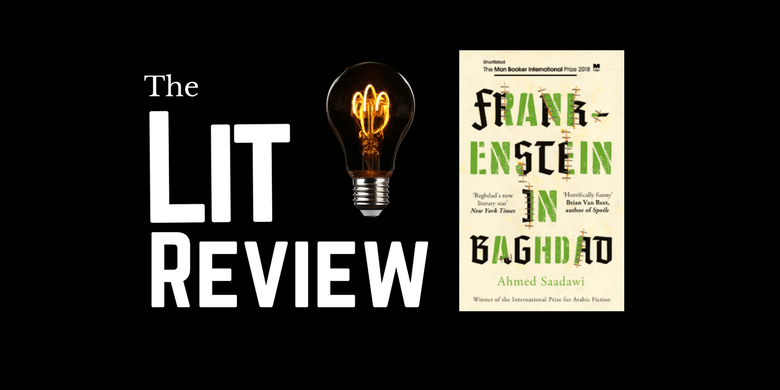 Who: Ahmed Saadawi is an Iraqi novelist, poet, screenwriter and documentary filmmaker. Frankenstein in Baghdad is his third novel. It won the International Prize for Arabic Fiction in 2014 and is shortlisted for the Man Booker International Prize 2018.

What: Frankenstein in Baghdad is set in war-ravaged Baghdad. Stitched together from the body parts of bombing victims, the Frankenstein is animated by the spirit of vengeance and wreaks havoc in a city that does not discriminate between the guilty and the innocent. Meanwhile, city authorities struggle to maintain some semblance of order in an increasingly anarchic state while rapacious opportunists take advantage of the chaos to increase their personal wealth and forward their own political ambitions.

Why: It is always refreshing to encounter a novel that does what it claims to do, namely, be novel. War novels are particularly guilty of failing to introduce new ideas resorting to tried and true set pieces: love in a time of war, redemption, the brotherhood and fraternity of soldiering, innocence in a time of war — it’s all pretty much been done. This is not to say that they aren’t excellent reads, but simply that there hasn’t been anything novel of late. Not really.

Enter Frankenstein in Baghdad: set in US-occupied Central Baghdad, the story is told through the lens of several protagonists. Further uniting this cast of characters is the mysterious Frankenstein of Baghdad — a creation of Hadi the junk dealer who creates the golem from the body parts of bombing victims, ostensibly to ensure that the bombing victims receive a proper burial as a whole corpse rather than discarded as bits of detritus.

The creation, named Whatsisname by his father, is animated by the spirit of vengeance and seeks to bring justice to those responsible for killing the former owners of his body parts. In doing so, the Whatsisname builds a cult status of his own, gathering a troop of disenfranchised and downtrodden to do his bidding, including locating spare replacement body parts.

Meanwhile, the ambitious but naive journalist Mahmoud has found in the monster the makings of a story that will propel him towards fame and, hopefully, the bed linens of one Nawal al-Wazir. Nawal, unfortunately, is the girl Friday of his boss, Ali Baher al-Saidi, whose appetite for power is matched only by that of Brigadier Sorour Mohamed Majid, the head of the enigmatic Tracking and Pursuit Department. Both men intend to make the most of opportunities presented by the war to increase their influence over a reeling city that will nevertheless return to some semblance of order at some point.

All the while the widow Elishva, also known as Umm Daniel or Daniel’s mother, maintains her vigil for her lost son who disappeared during the Iran-Iraq conflict some two decades earlier. A fervent Christian, she cajoles and negotiates with the portrait of St George on her wall to fulfil his promise and return to her her beloved son. And it is a case of prayers answered when she comes across the assembled corpse at Hadi’s house next to hers.

Frankenstein in Baghdad is at once an absurdist comedy, an experiment in magical realism and a moralistic fable about the inanity of war. Surreal without the dizzying imagery that accompanies like-novels and darkly satirical without becoming punch-drunk, the story benefits from Jonathan Wright’s direct and lean translation and Saadawi’s wry sense of humour. But there should be no mistake — Saadawi makes a strong editorial comment about the war in the book: That it is senseless, vicious and ultimately absurd.

Indeed, the inclusion of Mary Shelley’s creation only serves to make taut the tension between the real and unreal in the reader’s mind. Was there truly a golem going about Baghdad? Or is it the fevered imaginings of a teller of tall tales, the made up enemy of a militant state seeking to establish an enemy — no matter how fantastic — to marshal popular support for itself?

What is plenty real, however, is that war is hell. War is protean, paradoxical and meaningless, and Whatsisname embodies these paradoxes: His goal is to obtain justice, but justice can only be obtained by performing an injustice, which in turn requires justice, and so on. Inevitably, the conviction that justice was being served becomes increasingly cloudy: “I held firm to the idea that I had only hastened the old man’s death. I was not a murderer: I had merely plucked the fruit of death before it fell to the ground.”

It is that sort of reckoning against one’s sense of self that forms the meat of the book not just for the monster but for all the residents caught within the conflict’s vortex.

Verdict: Despite there being a Frankenstein monster, the lack of a central focal point, which may very well be the point of the whole story, is a bit distracting. (7/10)