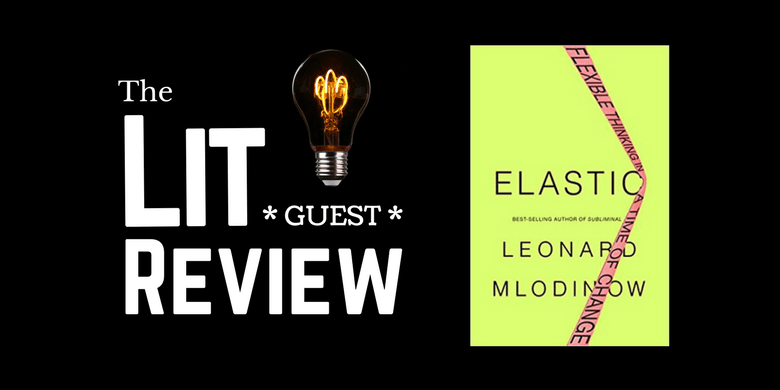 Who: Leonard Mlodinow is a theoretical physicist and author of several New York Times best-sellers, including The Drunkard’s Walk: How Randomness Rules Our Lives, Subliminal: How Your Unconscious Mind Rules Your Behaviour, The Grand Design co-authored with Stephen Hawking, and War of the Worldviews, co-authored with Deepak Chopra. But lest you think the man is a humourless science bot with nothing but quantum research and multiple award-winning books to his name, he was also a writer on TV series Star Trek: The Next Generation and McGyver – whatever that might be worth. Elastic: Flexible Thinking in a Time of Change is his latest book.

What: Elastic captures in a single-world title Mlodinow’s belief that success in a time of overwhelming output lies in a flexible cognitive style. The sheer volume of information and speed at which things change today is exponentially higher than in decades past and the dizzying pace at which all this takes place necessitates cognitive mechanisms that are not just effective, but efficient.

There are compelling examples to illustrate this point. Between 2004 and 2014, over 5,000 new scientific journals were created to accommodate an estimated three million journal articles a year. The number of websites in existence doubles every two to three years. Social behaviours are constantly being challenged and reshaped with the global reach of the Internet pushing communities both online and offline to consider new ideas and adjust accordingly.

Elastic thinking, hence, refers to the ability to face and produce ideas intelligently, epitomising the phrase “work smarter, not harder”. It propagates imaginative, original and non-linear thinking as well as play with new paradigms. In short, it’s the source of invention and innovation, allowing for a break-away from convention to dabble with possibilities, however far-fetched.

Why: Faced with a tsunami of information to sift through daily and with disruption a key theme in new ideas and platforms – requiring constant adaption and “unlearning” – mental agility becomes a necessity. The good news is that Mlodinow believes such nimbleness can be trained, if not an inherent trait; we can become smarter consumers and creative generators. Elastic thinking increases the “capacity to let go of comfortable ideas and become accustomed to ambiguity and contradiction”.

Mlodinow’s ideas in themselves are not original. He doesn’t dismiss analytical thinking – seen as the antithesis to elastic thinking with its formulaic or logical processes – but encourages greater attention to the latter with applications incorporating the former. What he does do well is pair the latest findings in neuroscience and psychology to explain the whys and hows of elastic thinking, all presented in a conversational, comprehensible manner. The book is approachable, tackling what could be an intimidating or foreign (for the first-timer) subject with informal ease. Four sections cover confronting change, how we think, where new ideas come from, and liberating your brain. Within these sections, each chapter opens with an anecdote and relates the scenario to a bigger behaviour or practice at play. Anyone with sufficient attention span could get through Elastic easily enough and grasp the concepts. At its worst, this serves as an up-to-date compilation of theories, findings and applications. At its best, it’s a relatively quick manual on how to reframe the way we think to not just survive, but thrive.

Verdict: Does a solid job of providing a glimpse into the fascinating subject that is the flexibility of the human mind and how it has helped man flourish across centuries and around the world. (7.5/10)