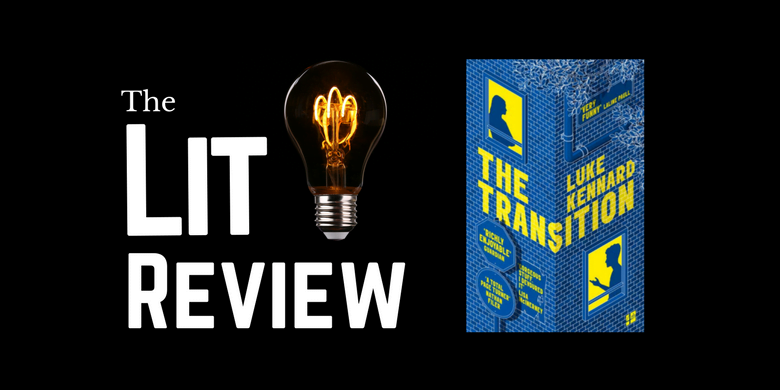 Who: Luke Kennard is better known for his five collections of poetry, one of which won the Eric Gregory Award in 2005. In 2014, he was selected by the Poetry Book Society as one of the Next Generation Poets. The Transition is his first novel and was long-listed for the Desmond Elliott Prize.

What: Karl Temperley is the hapless, underachieving poster boy of generation rent. Sent out into the world armed with a graduate degree in Metaphysical Poetry worth £78,000, he quickly learns that intimate knowledge of John Donne and Henry Vaughan didn’t really amount to a whole hill of beans in modern day London. Disenfranchised, cynical (when he can muster the energy for it) and accompanied with too much wit, Karl finds himself employed as a sweatshop academic, churning out “study aids” for students. Unable to cover rent or basic necessities —due in part to his penchant for “flavoured coffees the size of poster tubes” — and the demands of his somewhat eclectic teacher wife Genevieve, he turns to benevolent credit card companies to make ends meet. There is, however, a limit to their benevolence.

Charged with credit card fraud and looking at 15 months in prison, Karl is offered the opportunity to participate in the Transition in lieu of jail time. The Transition is ostensibly a rehabilitation programme designed to instil teachables such as financial planning, dental hygiene and time management. The goal, one is led to believe, is to reintegrate programme participants into society as productive and beneficial members. With no options left, Karl enrols with Genevieve, and are placed as “proteges” under Transition mentors Stu and Janna. Living arrangements are top notch, and the programmes, eye-rolling though they might be, seem to be helping. At least for Genevieve if not for Karl.

But of course, it’s too good to be true. Karl discovers that the Transition is a cover for a sinister-ish programme threatening to separate him from Genevieve.

Why: I was drawn to the book because it promised to be funny, and it is, although much of it is owed to Karl’s wry and deadpan observations and repartees. The dialogue between the characters is something that Kevin Smith would put in a script, which can both be fantastic and abysmal simultaneously. Karl is a throwback to the mid-90s when grunge and alternate youth were in ascendance; when young people in their 20s fresh out of university were generally bitter and recriminatory. It’s funny in the way that Reality Bites was funny, which is to say that it won’t be funny for everyone.

But Kennard does litter genuinely funny lines throughout the novel:

The Transition tackles a few other themes aside from that of the modern impoverished. These include themes of mental illness, societal integration, George Orwell’s 1984 and perhaps love. The latter is a bit strange because clearly Karl loves Genevieve, but it’s never made very clear why. She’s not particularly lovable and Karl’s love can be better described as an obsession that has run on for too long; an unhealthy co-dependence would probably be a fitting description. Nevertheless, there is love.

Did I mention there was a secret, sinister plot?

Best/Worst Line: “A turn for the worse was taken.”

Verdict: A fun dysopia which is probably less dystopic than it intends to be. Both Karl and Genevieve deserve a smack every now and then. (7/10)