‘I shall speak of ghost, of flame, and of ashes.’ These are the first words of Jacques Derrida’s lecture on Heidegger. It is again a question of Nazism of what remains to be thought through of Nazism in general and of Heidegger’s Nazism in particular. It is also “politics of spirit” which at the time people thought they still want to today to oppose to the inhuman.

“Derrida’s ruminations should intrigue anyone interested in Post-Structuralism… This study of Heidegger is a fine example of how Derrida can make readers of philosophical texts notice difficult problems in almost imperceptible details of those texts.” David Hoy, London Review of Books

“Will a more important book on Heidegger appear in our time? No, not unless Derrida continues to think and write in his spirit…Let there be no mistake: this is not merely a brilliant book on Heidegger, it is thinking in the grand style.” David Farrell Krell, Research in Phenomenology 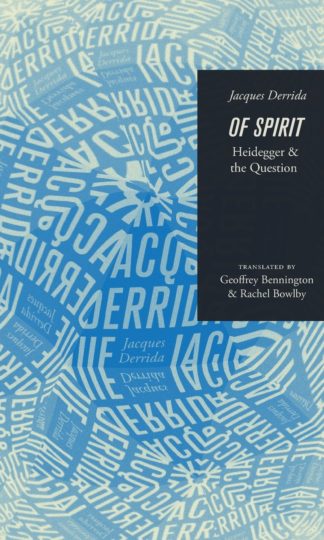 You're viewing: Of Spirit RM103.90
Add to cart
Join Waitlist We'll alert you as soon as the product comes back in stock! Please leave your email address and quantity sought in the fields below.