IN THIS VOLUME: Ghosts of the Tsumani by Richard Lloyd Parry・Living in Shimokitazawa by Yoshimoto Banana・Why Japan Is Populist-Free? by Ian Buruma・plus: a Shinto sect in the shadow of power, feeling debts by disappearing into thin air, the decline of sexual desire, the obsession with American blues, the strongest sumo wrestler of all time (who isn’s Japanese), the revenge of the Ainu and much more…

Visitors from the West look with amazement, and sometimes concern, at Japan’s social structures and unique, complex culture industry; the gigantic scale of its tech corporations and the resilience of its traditions; the extraordinary diversity of the subcultures that flourish in its “post-human” megacities. The country nonetheless remains an intricate and complicated jigsaw puzzle, an inexhaustible source of inspiration for stories, reflections, and reportage.

The subjects in this volume range from the Japanese veneration of the dead to the Tokyo music scene, from urban alienation to cinema, from sumo to toxic masculinity.

Caught between an ageing population and extreme post-modernity, Japan is an ideal observation point from which to understand our age and the one to come.

“Some Japanese stories end violently. Others never end at all, but only cut away, at the moment of extreme crisis, to a butterfly, or the wind, or the moon.”―Brian Phillips

What is THE PASSENGER?
The Passenger collects the best long-form essays, investigative journalism, literary reportage, and visual narratives in order to tell the story of a country or city and to portray its shifting culture and identity, its public debates, the sensibilities of its people, its burning issues, conflicts, and open wounds. Taken together, these fragments form a novel, complex picture. 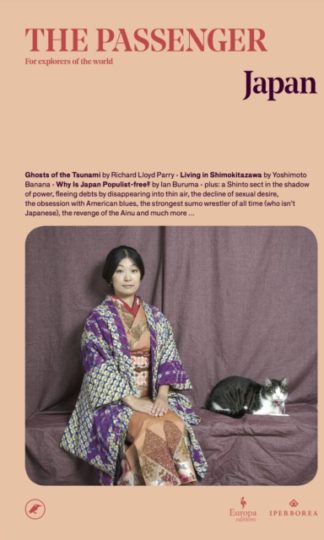 You're viewing: The Passenger #1: Japan RM110.50
Add to cart
Join Waitlist We'll alert you as soon as the product comes back in stock! Please leave your email address and quantity sought in the fields below.