IN THIS VOLUME: Order and Progress? by Jon Lee Anderson・Funk, Pride and Prejudice by Alberto Riva・On the River, I Was King by Eliane Brum・Also: the road that dissects the Amazon; the TV tycoon who shaped Brazilian history; the neo-Pentecostal community that is winning the hearts (and wallets) of Brazilians; politicised samba dancers, idealist gangsters and much more …

In the second half of the 20th century Brazil made extraordinary contributions to music, sport, architecture. From “bossa nova,” to acrobatic soccer, to the daring architecture of Oscar Niemeyer and Lúcio Costa, the country seemed to embody a new, original vision of modernity, at once “fluid, agile, and complex.”

Seen from abroad, the victory of the far right in the 2018 elections was a rude awakening that suddenly turned the Brazilian dream into a nightmare. For locals, however, illusions had started fading long ago, amid paralyzing corruption, environmental degradation, racial discrimination, and escalating violence. Luckily Brazilians have not lost their desire to fight, minorities are still determined to assert their rights and, now that the glorious past is dead and buried, a desire to rebuild for the future is emerging. Today the challenge of telling the story of this extraordinary country consists in finding its enduring vitality amid the apparent melancholy.

“How can we define the indefinable? Is it possible to pin a single label on a country so multi-faceted that it appears almost schizophrenic?”―From “In Defense Of Fragmentation,” Michel Laub

What is THE PASSENGER?
The Passenger collects the best long-form essays, investigative journalism, literary reportage, and visual narratives in order to tell the story of a country or city and to portray its shifting culture and identity, its public debates, the sensibilities of its people, its burning issues, conflicts, and open wounds. Taken together, these fragments form a novel, complex picture. 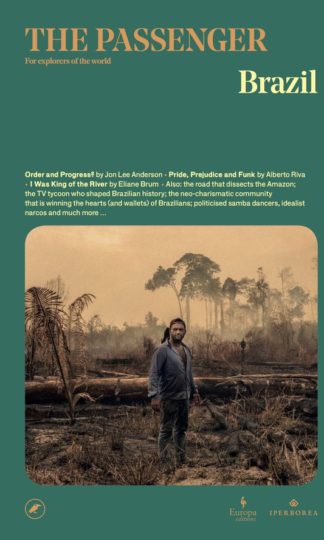 You're viewing: The Passenger #3: Brazil RM110.50
Add to cart
Join Waitlist We'll alert you as soon as the product comes back in stock! Please leave your email address and quantity sought in the fields below.