“Money is what God used to be. Good and evil have no meaning any longer except failure and success.”

Disgusted by society’s materialism, Gordon Comstock leaves his job in advertising to pursue an ill-fated career as a poet. In his race to the bottom, only Rosemary, his long-suffering girlfriend, challenges Gordon’s self-destructive course.

The novel contains the most sustained reflections on the role of the author and the artistic imagination anywhere in Orwell’s fiction, as the book’s protagonist struggles (and ultimately fails) to reconcile his romantic-aestheticist sensibilities with thepressures of the literary marketplace and with social expectations. Completed while Orwell travelled north to work on The Road to Wigan Pier, this novel is a key transitional text in his career. Offering a powerful portrayal of the emotional toll of precarity and the desire to break with capitalism,Keep the Aspidistra Flying is a significant work of mid-century British fiction but it also speaks to our own time. 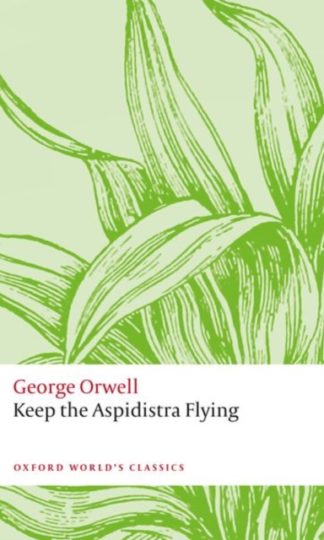 You're viewing: Keep the Aspidistra Flying RM52.90
Add to cart
Join Waitlist We'll alert you as soon as the product comes back in stock! Please leave your email address and quantity sought in the fields below.