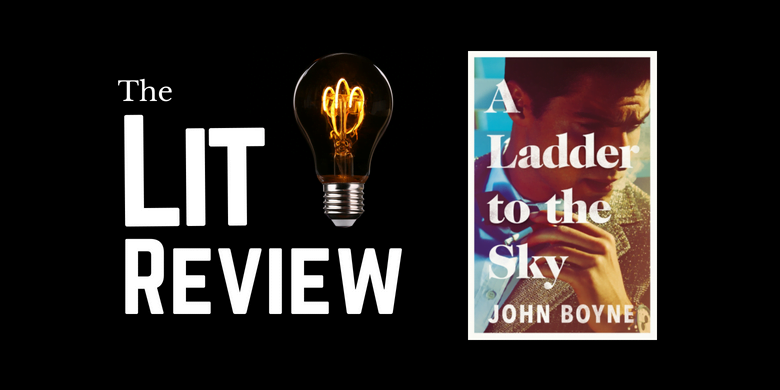 Who: Irish author John Boyne has written 11 novels for adults and five for younger readers, including the acclaimed and highly successful, The Boy in the Striped Pyjamas, which was turned into a film. He is also the author of the short story collection, Beneath the Earth, and is a regular book reviewer for The Irish Times. Boyne has been awarded numerous Irish book awards and international literary awards, such as the Que Leer Award for Novel of the Year in Spain and the Gustav Heinemann Peace Prize in Germany. In 2012, he was awarded the Hennessy Literary ‘Hall of Fame’ Award for his body of work. In 2015, he received an Honorary Doctorate of Letters from the University of East Anglia. His latest adult fiction is A Ladder to the Sky.

What: Maurice Swift has harboured ambitions to be a writer since his teens. As a young man in post-war Berlin, Maurice has a fortuitous encounter with celebrated novelist Erich Ackerman with whom he ingratiates himself. Erich is lonely and has a tragic story to tell, and Maurice needs a story to write about. Maurice’s debut novel based on Erich’s life story is a hit and sets him on the path to literary stardom. But that only intensifies Maurice’s pursuit of other people’s stories, and he will stop at nothing to succeed.

Why: I have a confession to make: This is my first John Boyne novel, and it is a great introduction to Boyne’s storytelling prowess. A Ladder to the Sky is a brilliantly crafted, riveting tale of dark ambition and of the extremes that a man would go to attain his goal. It’s a familiar trope to be sure: an ambitious, psychopathic protagonist with a bit of talent but not quite enough to become one of the greats, and thus resorts to manipulation and theft. What makes A Ladder to the Sky intriguing is the setting of the tale, which takes place in the literary world; I wouldn’t be surprised if Boyne drew from his personal experiences in the industry to pen this tale.

By turns salacious, scandalous and shocking, the story is told in a non-traditional way using multiple narrators. Far from it being distracting, however, I enjoyed the manner in which this thrilling, plot-driven tale unfolded. The novel is divided into three parts that span three stages of Maurice’s career, with each successive stage seeing him become increasingly ruthless. In between the three main chapters are two shorter, third-person interludes that serve to enhance the overall narrative.

The novel begins with Maurice as a young man with only aspirations of being a writer, and this is told from Erich’s perspective, the veteran novelist he befriends. Part two picks up a few years after Maurice’s successful debut but he is now experiencing a mid-career slump and getting desperate by the day. He is married to Edith, also a novelist, and the story is told from her point of view. In the third and final portion of the book, we finally get inside Maurice’s head and learn that his is a pattern of behaviour established from young.

Does Maurice get his comeuppance? All I will say about this is that the novel is satisfactorily resolved at the end.

Verdict: A page-turner on the pitfalls of ambition. (8/10)

Special thanks to Times Distribution for an advance copy of the book.