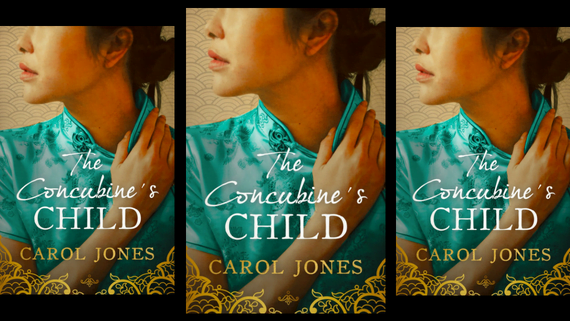 On June 16, we had the pleasure of hosting Australian author Carol Jones at Lit Books to talk about her novel, The Concubine’s Child. The great majority of the novel is set in 1930s Kuala Lumpur, where a young girl is sold off to become the unhappy concubine of the rich Chan towkay. All hopes and dreams shattered, she curses the family and its descendants with her final breath. Fast forward 80 years and Nick, the last surviving heir of the Chan line, finds himself lost and adrift, and decides to return to Malaysia to discover his roots. However, he may have found more than he had intended in uncovering these musty old skeletons.

The following are highlights from the Q&A session.

Min Hun: Why did you decide to write this story and what was the research that went into it?
Carol Jones: I’ve been coming to Malaysia for a long time. My husband’s Malaysian and we’ve been married for 27 years. We visit for 2-3 weeks every year. It’s a fascinating place; Kuala Lumpur is a great city and there are a lot of interesting stories. I married into the Chinese culture and I find it’s a really interesting culture with all sorts of contradictory elements to it. It was a way for me not only of writing for another audience but exploring stories for myself… It was a way for me, I suppose, to process a lot of things I’ve experienced over the years. I was inspired by some things my family had told me. For instance my mother-in-law, who grew up in the 1930s, she never actually went to school; she went to the clan association. This, in fact, inspired the first chapter of my book.

MH: The story of the unhappy concubine is one that’s familiar to me because it’s so much of my lived experience. I have an uncle with two wives and I know my great grandfather had multiple wives. I’m curious as to how you fell into this particular story, this particular trope of the concubine.
CJ: Reading some of the memoirs of people growing up in the early 20th century in the Straits settlements, what’s interesting to me was the idea of the concubine seemed quite matter-of-fact. People just took it for granted that any man with any money had more than one wife. When I was researching this book, one of the first things I did was come back to those memoirs: Down Memory Lane in Clogs (Growing up in Chinatown) by Si Jing, Memories of a Nonya by Queeny Chang, and Nyonya Mosaic: Memoirs Of A Peranakan Childhood by William Gwee Thian Hock.

MH: In the book, you incorporate cultural and linguistic constructs that are unique to the Cantonese Chinese or to Malaysia. How much do you expect your non-Malaysian readers to understand them?
CJ: It’s like any metaphor… These Cantonese Chinese phrases or sayings that I put in there, sometimes I would say, “Like the old saying, blah blah”, but often I just put them in there. I’m not really worried about people not understanding it; I thought they’d just see it as a metaphor and work it out. I’m actually more concerned they would think I’m a lot smarter than I am. They might think I made up this really clever, funny metaphor when in fact it’s a Cantonese or Malaysian saying.

It’s always a balancing act when you’re writing for an international audience. I’ve got to balance writing a wonderful story with enough information that the non-Malaysian reader can get the gist of what’s going on and also get enough colour in the story that they will find it interesting. But I have to balance that with the local reader so they don’t read and think ‘why did she have to explain that’ and for it to become really boring. It’s a balancing act and I think you never get it totally right. There were some things where I chose not to explain and I just left them there as a little extra thing for a local reader.

MH: In this age of political correctness, was cultural appropriation something that crossed your mind when you were writing the book?
CJ: It did cross my mind; I was conscious of it all the time when I was writing the book. But I wanted to write the story — it had been growing in my head for several years. I had to write the story; it wouldn’t let me go. I just had to make sure that I was as thorough as I could be with my research and that I was true to the history and to the characters, and that I try to understand why they would act the way they act. That’s all I think you can do when you’re writing the story.

One American book blogger — I think she’s coming from the perspective of you should never write about a culture that’s not your own, which is a stance that a lot of people have — she was saying that she thought the book was just critical of every character in it. I thought she just didn’t understand the book. I was trying to get beyond the surface and show how people felt.

MH: I really liked your 1930s arc. I thought that story was great: nostalgic, sentimental — a lot of stuff I could relate to. The contemporary arc, however, I enjoyed it less. What was the role of the contemporary arc? To bring closure to the saga or…?
CJ: I expected that. When you have a dual timeline story, a lot of people enjoy the historic story more than the contemporary one. That’s just what happens. I think it’s because the historic story is usually a mystery and it usually has so much more of an exotic flavour. This is not just my book but in general with any dual timeline story. Of course, in this instance, it’s all that nostalgia as well.

The Concubine’s Child is available in-store for RM69.90.