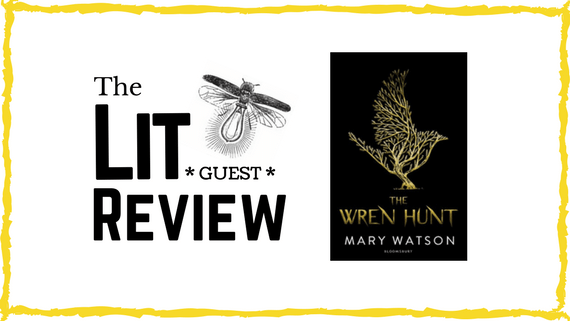 Who: Mary Watson moved to Ireland from South Africa over a decade ago and found herself captivated by the magical landscape she now calls home. She has written a collection of short stories, Moss, which bagged the Caine Prize in 2006, and has written a full-length novel, The Cutting Room. The Wren Hunt, inspired by an Irish tradition, is her debut YA novel and the first of a series.

What: Every St Stephen’s Day, as per tradition, a group of boys in the Irish village of Kilshamble organise a Wren Hunt. Only this version a little warped, involving the chase of the unfortunately named Wren Silke through the woods surrounding the isolated village.

The hunt takes on heavier meaning this year as Wren comes into her powers, the fairly useless – or so she thinks – gift of obscure visions. Two factions reside within this community: the powerful Judges who control the nemeta, a source of power, and the Augurs, who have been driven into hiding in plain sight. The boys who torment Wren belong to the former and Wren’s people are part of the latter. In a desperate bid to save them from their dwindling magic, she takes on a dangerous undercover assignment right in the heart of the Judge’s lair. Caught in a web of deceit and conflicting loyalties, she holds the fate of the Augurs in her young hands.

Why: Reviews of The Wren Hunt consistently remark on the difficulty in categorising the book for fear of pigeon-holing it into a restrictive genre, and for good reason. Part fantasy, part thriller, and (small) part romance, it stands in a league of its own and seems poised to have a cult following.

It takes off on a rather dark and disturbing note, opening immediately to the tense hunt, and the first couple of chapters are somewhat hard to follow. I’m glad I persevered though. The mystical Irish setting and consequent lyrical language are highly atmospheric and set the tone for a haunting tale. The action picks up pace steadily and by the middle of the book, it keeps you in painful suspense as Wren tries to ingratiate herself with a high-ranking Judge while surrounded by her tormentors.

Character development occasionally falls a little short but this is offset by the skilful way the author handles the interactions between the characters and plays with subtle nuances in storytelling. The hostility between the Judges and Augurs is adeptly explored, and the world-building is fascinating. It can get a little confusing at times – oscillating between insufficient and too much in the way information is revealed – but soldier through and you will be rewarded with an utterly unexpected and well-crafted twist. Watson’s novice shows at times in her debut novel but her originality and rich imagination will keep you intrigued, if uneasy.

Reading Level: Ages 15 and up

Verdict: A bit of a difficult read, it is haunting, a touch dark and wrapped in a mesmerising branch of old magic. (7.5/10)