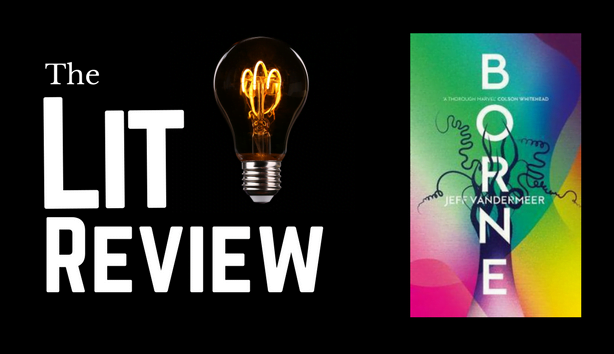 Who: Jeff VanderMeer is the author of the bestselling, award-winning Southern Reach trilogy (Annihilation, Authority, and Acceptance), the first of which was adapted into a critically-acclaimed movie on Netflix. VanderMeer is a three-time World Fantasy Award winner and 15-time nominee, and widely regarded as a leading fantasist.

What: Borne takes place in an unnamed City, at an unknown time, in an unknowable dimension. The City is ruled by a malevolent ursine god-emperor, the giant flying bear Mord. Mord, of Godzilla-esque proportions, is the product of the morally ambiguous organisation known only as the Company, which pumps out biotech for purposes both pragmatic and nefarious. Biotech has effectively taken over the natural world in the City, with humans likely the only ones that have not been experimented on (at least not on a large scale). The story of the City and Mord is told in the first person by Rachel, a scavenger par excellence who ekes out the barest living with her lover and partner Wick formerly of the Company. Wick grows and manufactures biotech from the raw sluices of his bio-pool in their descriptive but unimaginatively named hideout Balcony Cliffs. There is no water in the City save in toxic sludge pools; food must be scavenged; and booze comes from the insides of bio-engineered fish. But all this changes when Rachel finds Borne, an innocuous-looking sea anemone, on one of her scavenging sorties.

Why: There are quite a few layers to Borne. On the one hand, it’s a story about a survivalist doing the best she can in a really trying situation; on the other, it’s about a mother and child relationship a la ‘We Need to Talk About Kevin‘. On a third (bio-engineered) hand, it’s about humanity’s self-destructive practice of strip mining natural resources and returning genetic modifications into nature; and on a fourth tentacle, it’s about royal rumble between a 20-storey giant flying bear and a giant sea anemone. Is there too much going on? Fortunately, thanks to the book’s slimy, malleable, bio-organic theme, the story unfolds fairly smoothly and manages to check some of VanderMeer’s wilder imaginings. Admittedly, it takes time to accept a giant flying god-emperor bear.

Nevertheless, VanderMeer’s universe with its writhing, sinewy, biological perversions can be difficult to stomach, particularly for someone with acute trypophobia. The bio-engineered creations in the City occupy that fine border demarcating magical fantastical reality and pure fantastic perversions — a fact happily acknowledged by Rachel: “In the City, the line between nightmare and reality was fluid” as evidenced by modified children who are armed with “an explosion of colours and textures and a variety of limbs”. There is something uncanny valley-ish about VanderMeer’s city in that everything within it is recognisable as both real and unreal at the same time. Red salamanders rain from the sky only to dissolve into liquid when hit by sunlight, predator cockroaches and crab spiders function as biotech defences, and a giant leviathan of a fish masked with a human woman’s face is used as an assault weapon — this is some trippy stuff.

For the lucky reader, all these unrealities recede into the background after a while: Of course they are going to mine no-man’s land with bio-engineered bugs and tentacles. What else were they going to use? Mines? And there is also the side-story of Rachel’s exodus from a much more normal and bucolic childhood to this Lovecraftian nightmare of the City. Central to the story is the notion of secrets — kept both by Wick and Rachel, and embodied in both Borne and Mord. As with all stories containing a secret, some of the narrative borders dangerously close to melodrama leaving some readers including this one to wonder how people as childish and immature as Wick and Rachel could ever hope to survive in the City’s nightmarish wasteland. (This is also a problem I had with Ernest Cline’s Ready Player One).

Giant flying bears, alcoholic minnows, battle beetles and demonic children aside, it is perhaps unfortunate that the most difficult creation to stomach is the eponymous Borne with whom Rachel develops a maternal bond. It’s not so much the physiology of Borne or his mind-bending physical capabilities, but its personality and extent of its mental development that feels like a bridge too far. It’s clear that VanderMeer hoped for Borne to be a multi-textured being that struggles with existential and ethical angst, but nevertheless retains its child-like innocence. This theme of an innocent killing machine is a pet peeve of mine and has rarely been pulled off well. I do not think Borne is an exception.

Verdict: Imaginative and more fun in retrospect than in the actual reading. It certainly makes me want to read some of VanderMeer’s earlier novels and perhaps catch Annihilation on Netflix. (7.5/10)