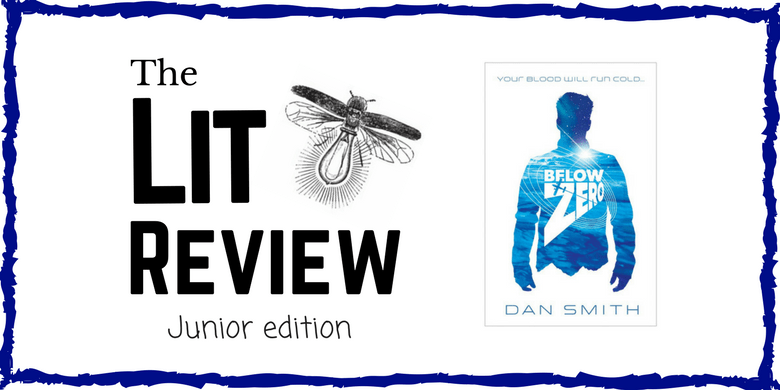 Who: Award-winning UK author Dan Smith writes adventure stories for children and thrillers for adults. His latest novel for young readers is Below Zero.

What: At Outpost Zero in frigid Antarctica, eight families have volunteered to be part of the Exodus Project, a programme designed to train them for life on Mars. Enter our would-be hero, Zak, his parents, and older sister, May, who cut their beach holiday short so that Zak’s parents could check on their malfunctioning invention, the spider drones. The scene at the base, however, is less than welcoming. The power supply is erratic, the vehicle parked out front is damaged, and the people who were supposed to be on-base seem to have disappeared.

Suspicion is immediately cast on the work being done by scientists from BioMesa, an enigmatic biotech company that have set up shop in the Antarctic. They are — were — currently studying a mysterious life form discovered in The Chasm, a fissure in the thick antarctic ice a stone’s throw away from Outpost Zero. That the strange going-ons at the base are due to these alien critters comes as a surprise to Zak and his family, who how have to fight to outsmart the invaders. But as each of his family members fall prey, one by one, to the creatures, Zak finds himself having to play the part of the reluctant hero.

Meanwhile,  another menace is brewing in the form of The Broker. He wants to get his hands on the alien life form BioMesa discovered and has deployed a weaponised tactical team to steal it. But what started out as a straightforward mission quickly goes awry.

Why: I’ll say this right off the bat: I really enjoyed this. It’s a fun sci-fi page-turner with a background scenario that’s so current — training for life on Mars — even if the main plot does not revolve around it. I like a good alien story, and this one surprises in pleasant ways.

Parents looking for a stimulating story with an empowering thread will find it here. A sensitive and thoughtful lad, Zak is an unlikely hero. He isn’t particularly brave or strong, and he suffers from a brain tumour, and is dreading the treatment he would have to start when he gets home. When it falls on him to save the day, he has to scrounge up courage to save his family from their fatal end.

Reading Level: Ages 11 and up

Special thanks to Pansing Distribution for a review copy of this book.