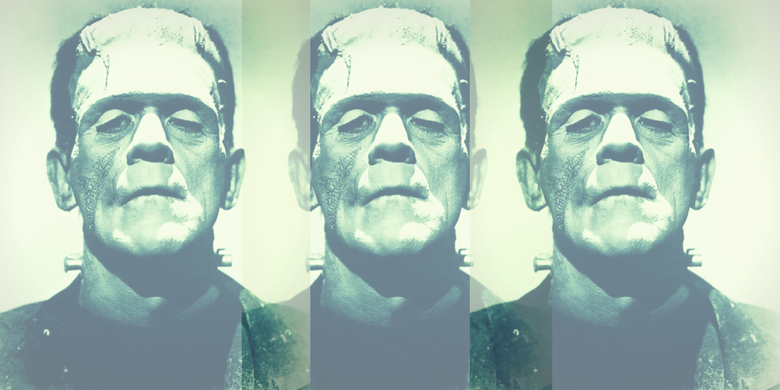 Mary Shelley’s Frankenstein: or, the Modern Prometheus, published 200 years ago on Jan 1, 1818, is still among the foremost novels dealing with the themes of unfettered human creativity and the consequences thereof.

Frankenstein’s obsessive labours are successful; but rather than the creature of beauty he had envisioned as his aim, he creates a hideous, distended monster which immediately brings about profound feelings of disgust and regret:

I had desired it with an ardour that far exceeded moderation; but now that I had finished, the beauty of the dream vanished, and breathless horror and disgust filled my heart… Oh! No mortal could support the horror of that countenance. A mummy again endued with animation could not be so hideous as that wretch.

Frankenstein turns his back on his creation. But as with all newborns, the Creature yearns for love and acceptance. Spurned by his creator, the Creature turns to others for succour but kindness does not come easy for the aberration. Enraged by his abandonment, the Creature kills Frankenstein’s young brother William in revenge, and threatens further harm unless the scientist created him a mate. Frankenstein initially agrees but cannot bring himself to create a second creature, subsequently causing the Creature to kill his fiancee Elizabeth.

The plot is sensational — at least for its time — but the philosophical questions raised by the novel continues to challenge contemporary readers. While Frankenstein’s subject matter of a reanimated corpse may seem quaint, its warning of the danger of science unleashed remains relevant. Unlike Pandora who unleashed the horrors of humanity through sheer curiosity, Shelley’s eponymous protagonist Dr. Frankenstein — the “Modern Prometheus” — laboured under morally justifiable grounds to uncover the secrets of the gods only to birth a tragedy. And just like the story of Pandora’s box, once the secrets are unleashed, there is no way back.

Shelley’s Frankenstein celebrates the 200th anniversary of its publication in 2018. Lit Books is pleased to announce that we will be joining the rest of the world in hosting a Frankenreads event on Halloween 2018 to celebrate the year of Frankenstein. Stay tuned for details closer to the date!