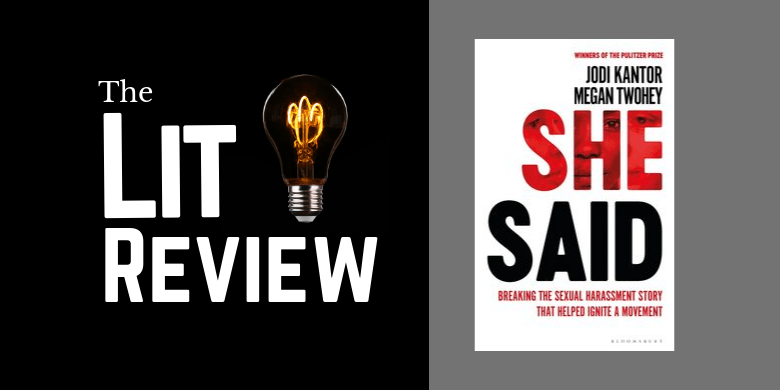 Who: Jodi Kantor and Megan Twohey are both New York Times journalists. Kantor started at the paper in 2004 as editor of the arts section before moving on to cover politics and investigative pieces. Twohey spent a decade uncovering sex crimes and sexual misconduct in Chicago and elsewhere before joining the Times in 2016. The duo broke the story of Hollywood producer Harvey Weinstein’s decades of alleged sexual harassment and abuse against actresses and female employees, which the Times published on Oct 5, 2017. The two women tell how they did it in She Said: Breaking the Sexual Harassment Story that Helped Ignite a Movement.

What: Prior to the Times’ exposé, at least two other newspapers attempted to write about Weinstein’s years of alleged sexual misconduct but their efforts were foiled, no thanks to the former film producer’s underhanded manoeuvrings. It was no different when Weinstein got wind of the Times doing a piece on him. On top of the legal threats that his team of defenders used to intimidate the journalists, Weinstein also hired an organisation of professional manipulators called Black Cube (made up of ex-Mossad intelligence agents!) “to prove he was a victim of a negative campaign”. That the Times managed to successfully and credibly publish the story despite all that is a credit to the paper’s prowess. Kantor and Twohey recounts all this with transcripts of interviews, emails and other primary documents reprinted in the book and give a scintillating play-by-play of the months they spent tracking down Weinstein’s victims, verifying their stories, and, most crucially, convincing them to go on the record. The tail-end of the book shines a spotlight on how and why psychology professor Dr. Christine Blasey Ford chose to reveal a decades-old sexual assault incident involving the US Supreme Court Justice Brett Kavanaugh just weeks before his confirmation.

Why: This is investigative journalism at its finest, and it offers a behind-the-scenes look into the journalistic process, the ups and downs, and moments filled with suspense and uncertainty but which ultimately ends in sweet triumph. From the less than promising start with actress Rose McGowan — an early Weinstein accuser — initially refusing to get on the phone with Kantor to uncovering a host of other women aside from actresses who had suffered similar incidents and were persuaded to break their silence, the book paints a clear picture of the monumental effort and journalistic rigour Kantor and Twohey employed in gathering a solid body of evidence of wrongdoing to write a water-tight exposé.

One couldn’t help but became emotional reading the part where they describe actress Ashley Judd finally consenting to go on the record after weeks of deliberating:

“Standing amid the neat lines of glass wall and grey carpet, Jodi lost it, like a marathoner collapsing at the finish line. She and Megan had spent months living in a state of suspense and responsibility. They would land the story or they would blow it; they would get actresses on the record of they would not. Weeping, Jodi searched for something to say to Judd that was equal to the moment but still professional. The best she could muster was, ‘This means the world to me as a journalist.’”

That Weinstein would employ the kind of dirty tactics he did to prevent the Times from publishing is almost unbelievable if not for the transcripts of correspondence and documents made available. But what is even more eyebrow-raising and infuriating is the revelation that the US has a system for muting sexual harassment claims, giving harassers the ability to commit the same offences time and again.

The publication of Kantor and Twohey’s investigative piece turned out to be a watershed moment:

“The name Harvey Weinstein came to mean an argument for addressing misconduct, lest it go unchecked for decades, an example of how less-severe transgressions could lead to more serious ones. An emerging consensus that speaking up about sexual harassment and abuse was admirable, not shameful or disloyal. A cautionary tale about how that kind of behaviour could become a grave risk for employers. Most of all, it marked an emerging agreement that Weinstein-like conduct was unequivocally wrong and should not be tolerated.”

The impact of the Weinstein story is still felt today (for better or worse, depending), and it is something that Kantor and Twohey grapple with in the book.

“The old rules of sex and power had been partly swept away, but it was not clear what the new ones would or should be. There was little agreement and rancorous debate over what behaviours were under scrutiny, how to know what to believe, and what accountability should look like. Years before, Tarana Burke had started the #MeToo movement to promote empathy and healing for victims of sexual violence, but now that label was being used as a catchall for a huge range of complaints, from verbal abuse to uncomfortable dates, many of which lacked the clarity of workplace or criminal violations.”

Despite there being a central and consistent thrust to the entire book, perhaps what is most refreshing is the cautionary note that it strikes with regards to reverting to mob rule. Yes, it is important that gender biases and abuses be exposed. Yes, women need to be brave and courageous and band together to make their voice heard. But no, this is not license to adopt every complaint as a battle-cry to steamroll over the opposite sex.

Verdict: A riveting, inspiring and empowering read that gives a better understanding of the #MeToo movement and its implications. (9/10)