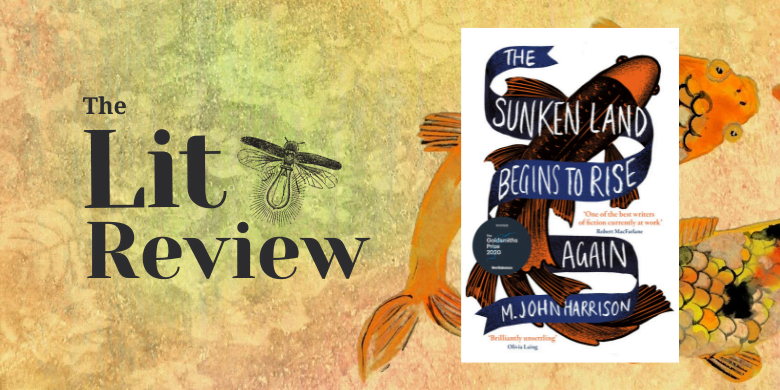 A few years ago, I made a spur-of-the-moment decision to accompany my wife and her brother on their sibling-bonding hike up Mt. Kinabalu. This was — is — something that I am not particularly keen to do, and the only reason I would have ventured to do so would be out of love or, as it was in this case, out of spite. The hike up Kinabalu is not particularly difficult or treacherous but it can be dire when the weather is inclement — which it was — and when the hiker at issue is unfit and overweight — which I was. There were plenty of occasions on the way when I’d simply wanted to quit, turn around and say, this is not for me. However, it was one of those occasions in life when you just had to keep going forward because you couldn’t turn back.

M. John Harrison’s The Sunken Land Begins to Rise Again reminds me of that hike: beautiful, grueling, unforgettable, momentous. I would add ‘regrettable’ but as with the hike, I think I’m rather glad for having read the book/ascended the mountain than if I had not. It is not the most accessible of books and it does not yield readily to judgements of “I liked it” or not; indeed, it may be almost sublime (in the technical sense of the term). Seldom does a book prompt immediate re-reading but this one did, if only for one to piece together the various clues scattered throughout the book.

Sunken Land follows the lives of two protagonists: Shaw and Victoria, unlikely middle-aged lovers whose lives are linked by a conspiracy website and the myth of an ancient, atavistic race of water people. Both are gripped in some form of low-key existential crisis — Shaw, recently unemployed, checks into a low-rent guest house on the bank of the Thames while Victoria, tired of city life, opts to move into her late mother’s house in Shropshire in the Midlands. They have a tenuous relationship, further strained by Shaw’s continuing effort to give up any and all forms of agency, while Victoria’s attempt at bucolic life is interrupted by a parade of strange characters at her new home by the river Severn.

Shaw picks up work with the eccentric Tim Swann whom he meets at a cemetery harvesting muddy water from a depression in the ground. A general dogsbody, Shaw is set to work on a number of seemingly random tasks, including visiting derelict wholesalers in the depressed outskirts of Greater London, jotting down the testimony of a retired civil engineer who had been arrested for violent disorder, and video recording the actions of a psychic during a séance. Shaw is happy to go along with Tim’s increasingly strange bequests, including the transport of a pale green body from a swimming pool to places unknown and bearing witness to an incestuous coupling.

Victoria, meanwhile, settles into a community where the locals seem to be participants in a strange cult that has as its bible Charles Kingsley’s The Water Babies, a Victorian-era fable about a boy who transforms into a water sprite. Her only friend is Pearl, the owner of a café in town who occupies a queenly position of sorts in relation to the other oddballs in town. Victoria’s suspicions become even more piqued by the strange gatherings of men in the middle of the night, a mysterious voice calling out to her at all hours of the day, and Pearl disappearing into a pond only inches deep.

Drained by their experiences, Shaw and Victoria meet once more but find themselves unable or unwilling to connect with each other. “I’m living without explanations, if you can understand that,” Shaw explains at one point. And Victoria: “I always want to tell you about my life but somehow I never can. Isn’t that weird?”

From a plot perspective, Shaw is doing exactly what he says — living without explanations. Things happen to him, around him, by him, but he is simply there accreting circumstances. One reviewer describes Shaw as “post-critical” — he no longer questions or wonders or connects, but simply allows things to happen around him, effectively transcending the subject-object dichotomy. This aloofness, if it can be called that, finally fails him at the end of the book:

Shaw stood in the doorway. He became convinced there was another person in the room with them, then recognised in a single pure instant that it was himself. Events seemed to have paralysed him, casting his consciousness into the old root of his brain whence it struggled to escape.

Victoria, who has more of her wits about her, finds that she, too, has lost her agency. Driven into a psychic noose by the cult-like inhabitants of her city, Victoria confronts a reality of her home in the Midlands that jars with her big city London sensibilities. Unlike Shaw, she is caught in an eschatological maze that defies her will at every turn and prods and leads her to an inescapable fate.

Reviewers have read in Sunken Land a psychogeography of Brexit Britain. While it may be difficult for anyone not residing in Britain to ascertain the veracity of that claim, it must be said that Sunken Land can be a discomfiting experience. The inconclusive and allusive plot that leads the reader on with the promise of closure — “Everyone gets an answer in the end,” an exasperated Victoria is told; “All will be revealed” Tim tells Shaw on another hapless adventure — never comes to a satisfying close. And yet there is something beautiful but haunting in the writing that both gladdens and terrifies at the same time; while I’m reluctant to draw parallels with Lovecraft, there is more than a nod in that direction viz the watery gothic imagery that saturates Sunken Land. The book is also about forgotten places: spaces left behind and forgotten by the passage of time, and in which the distinction between legend and reality becomes inseparable.

This was my first Harrison. Despite a substantial backlist of work in the realms of speculative and literary fiction spanning decades, I’d not come across his work until he showed up in my newsfeed as having won the Goldsmiths Prize for 2020. I tend to give this award, which recognises excellence in experimental writing, a wide berth. I will likely continue to do so but Sunken Land will at least make me pause to reconsider, and pick up a book out of spite.

The Sunken Land Begins To Rise Again is available here.