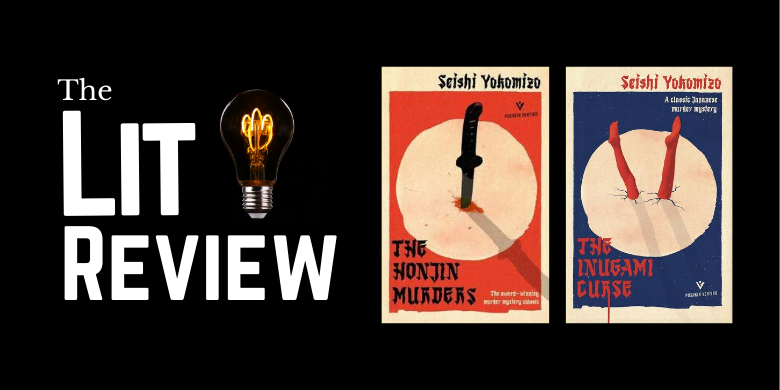 That the last few months have been stressful is an understated and moot statement so much so that the declaration needs no further elaboration. Escapism, therefore, was very much called for so far as my reading was concerned. As a result of which, anyone going through my recently-read list will find a substantial collection of pulp science fiction and detective novels, most of which were re-reads (familiarity is an effective, if temporary, balm for the soul).

It was during this time that I came across the newly published translations of Seishi Yokomizo’s detective novels The Honjin Murders and The Inugami Curse by Pushkin Vertigo. (Full disclosure: despite being a fan of Japanese crime thrillers and murder mysteries, I was not at all familiar with the Yokomizo name despite there being a literary award named after him. This may be due to the fact that only one of his novels had been published previously — The Inugami Curse was released as The Inugami Clan in 2013 by a previous publisher.)

I was thrilled to learn that the books were set in inter-war/post-WWII Japan as I had just come off a Sherlock Holmes binge and was very much still in the mood for period detective fiction. Likewise, both books feature a brilliant young detective, Kosuke Kindaichi, who has a good shout of being lumped together with the greats such as Auguste Dupin, Poirot and, of course, Holmes himself. It comes as little surprise that Yokomizo was a self-declared fan of the popular mystery novels of Western authors, particularly John Dickson Carr, and the Honjin Murders, a locked-room mystery, is very much a tip of the hat in Carr’s direction.

Picture this: the heir of the wealthy landowning Ichiyanagi family (former proprietors of a honjin — an inn frequented by warlords and other Japanese nobility in feudal Japan) and his new bride are found dead in their chambers on the night of their wedding. Both are stabbed to death and the murder weapon, a katana, is found blade down in a snowbank metres outside the chamber. On the days leading up to the double-murder, a mysterious and terrifying three-fingered man was spotted around the estate and making enquiries of the dead man. The manic playing of a koto (Japanese zither) could be heard in the nights leading up to the murder and on the murder night itself. Moreover, it takes only three fingers to play the koto…

As with all good detective novels, it seems that everyone in the extended family — the brothers, cousin and mother included — has a motive to kill except for the youngest sister who, being a bit simple, seems to be the only one who is innocent. But she is an expert koto player and seems to know more than she can or will let on. The local police are baffled, suspecting everyone and no one in equal measure. Enter Kindaichi, an eccentric-looking young man who has only recently started his detective practice following a less than stellar start in life. With a string of successive cases under his belt and the endorsement of the influential adoptive father of the dead bride, Kindaichi goes to work on the family.

The Honjin Murders is a wonderfully descriptive piece of period detective fiction replete with quirky family, mysterious bordering on supernatural suspense and numerous thrusts and parries between our hero detective and the unknown perpetrator. But as with all locked-room mysteries, much of the book’s success hinges on the big reveal of the murder mechanism at the end with three possibilities: the mechanism is not clever enough, the mechanism is just clever enough, or the mechanism tries to be too clever. I think we can safely scratch out the first possibility although I leave it to the reader to decide where the book fits in respect to the remaining two options.

Having been introduced to Kindaichi, we encounter him again in The Inugami Curse, which is set immediately after Japan’s defeat in WWII. It is again an unhappy family that is the seat of all ills. The story proper begins with the repatriation of one of the potential heirs of the wealthy and influential Inugami family following the completion of his tour of duty in Southeast Asia which left him a broken and disfigured man. The patriarch of the family had died a few months prior leaving behind express instructions that his will remain unread until the entire family could gather together.

But this was no gentle, wise old family head who expired; rather, it becomes immediately clear that there was a vicious streak in him that bore no love for either of his three daughters or their children. The will that is read is particularly divisive, with the fate of the bequest very much determined by the actions of a couple of outsiders including the granddaughter of a former benefactor and his illegitimate son by another, unrecognised woman. Moreover, the will is so structured that there is a very good chance that only one of the daughters would stand to inherit the fortune leaving the other two branches of the family very much out in the cold.

With razor sharp claws honed by years of ambition and indifferent treatment by their father, the three vituperative daughters will go to any means to secure the substantial wealth and businesses of the Inugami clan for their branch of the family. Kindaichi is first called on to the scene by one of the lawyers involved in the case because of several failed attempts at the life of one of the players in the will; however, the lawyer is himself killed before he can divulge his findings to the detective. So Kindaichi stays on and becomes an indispensable tool to the local police when, one by one, the heirs to the fortune are found dead in mysterious circumstances.

A quick google of The Inugami Curse reveals that it is one of Yokomizo’s more favoured novels with several movie adaptations made from it, and it is not difficult to see why. Compared to The Honjin Murders, Inugami is a more accomplished murder mystery that is made more complex by the competing motivations of the various actors in the novel. This may mean quite a few side plots and red herrings, but Yokomizo is masterful enough to tie up all the loose ends in a satisfying ending while maintaining a good level of suspense throughout the book. The Inugami Curse may also be the only detective novel which features a manhunt on skis, although this may just mean that I don’t read enough Scandi noirs.

It’s difficult for a non-Japanese reader to really gauge Yokomizo’s influence on the genre, but a regular reader of Japanese crime thrillers should be able to feel the distant echoes. Both books are really good yarns, and I for one am looking forward to the other translations of Yokomizo sensei’s works promised by Pushkin Vertigo.

Availability: RM52.90 for The Honjin Murders, and RM56.50 for The Inugami Curse — both in paperback