What’s in a Name

What’s in a Name takes the reader to the often-troubled heart of Malaysian politics and business over the last 50 years. Nazir Razak built CIMB Group into one of the most successful banks in Asean. In a career spanning three decades, he has been at the centre of the action. And when he was not, he had a ringside seat for all the biggest deals and power struggles, victories and defeats involving some of the most powerful characters of recent times.

In this revealing memoir, Nazir recounts what it was like growing up in Malaysia’s most prominent family, honouring the legacy of his late father, Abdul Razak, Malaysia’s revered second prime minister, while also being the brother of Najib Razak, whose term as prime minister ended with the ignominious 1MDB scandal, the fallout of which continues today.

This is not just the story of Nazir’s life as one of Malaysia’s most successful businessmen, it is also a drama of family loyalty and what happens when that loyalty comes into conflict with deeply held principles. Nazir concludes with an analysis of the Malaysian political economy from his unique vantage point, and makes a compelling case of reforms and how they can be made.

‘This book needed to be written and must be read by all Malaysians who care about their country.’ — Andrew Sheng

‘Not just a book forbankers, this is essential reading for anyone interested in the modern history of Malaysia. An outstanding book.’ — Eugen Rogan

‘This book is a tour-de-force reference for corporate values and good governance… A mesmerising read indeed.’ — Husammuddin Yaacub

‘One could not find a single personality as enthusiastic and determined… to put into reality his ideas about bringing Malaysia forward.’ — Musa Hitam 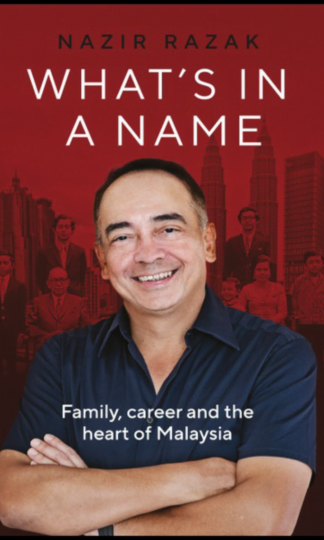 You're viewing: What’s in a Name RM89.95
Add to cart
Join Waitlist We'll alert you as soon as the product comes back in stock! Please leave your email address and quantity sought in the fields below.