Traitor or hero? Discover the truth behind the legendary Tokyo Rose. Tokyo Rose: Zero Hour tells the true story of Iva Toguri, a Japanese American woman who was visiting her relatives in Tokyo shortly before the attack on Pearl Harbor. Trapped in Japan, Iva refused to renounce her American citizenship. But she was forced to take a job with Radio Tokyo to host Zero Hour, a propaganda broadcast aimed at demoralizing American troops–in the role of the infamous Tokyo Rose, The Siren of the Pacific. The dramatic events recounted in this story include: Iva’s arrest by the Americans, who eventually found that her actions were blameless Her emotional return to the United States and the racially-motivated public outcry that led to her re-arrest and prosecution for treason The dishonest actions of prosecutors who coerced witnesses into providing false evidence against her The six years she spent in prison, and her eventual pardon by President Ford in 1977 Written by Andre Frattino and illustrated by Kate Kasenow, Tokyo Rose: Zero Hour has an introduction explaining the Tokyo Rose phenomenon and the devastating effects of World War II on Asian-American communities that continue to reverberate. In a world rife with misinformation and racial prejudice, the story of Tokyo Rose has never been more relevant. 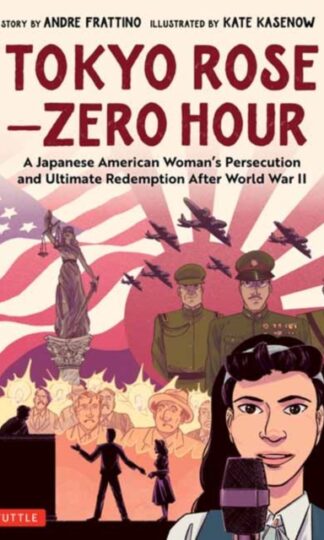 You're viewing: Tokyo Rose: Zero Hour RM69.00
Add to cart
Join Waitlist We'll alert you as soon as the product comes back in stock! Please leave your email address and quantity sought in the fields below.