Swami and Friends, the Bachelor of Arts, the Dark Room, the English

R. K. Narayan (1906–2001) witnessed nearly a century of change in his native India and captured it in fiction of uncommon warmth and vibrancy. The four novels collected here, all written during British rule, bring colonial India into intimate focus through the narrative gifts of this master of literary realism.

Swami and Friends introduces us to Narayan’s beloved fictional town of Malgudi, where ten-year-old Swaminathan’s excitement about his country’s initial stirrings for independence competes with his ardor for cricket and all other things British. The Bachelor of Arts is a poignant coming-of-age novel about a young man flush with first love, but whose freedom to pursue it is hindered by the fixed ideas of his traditional Hindu family. In The Dark Room, Narayan’s portrait of aggrieved domesticity, the docile and obedient Savitri, like many Malgudi women, is torn between submitting to her husband’s humiliations and trying to escape them. The title character in The English Teacher, Narayan’s most autobiographical novel, searches for meaning when the death of his young wife deprives him of his greatest source of happiness.

These pioneering novels, luminous in their detail and refreshingly free of artifice, are a gift to twentieth-century literature. 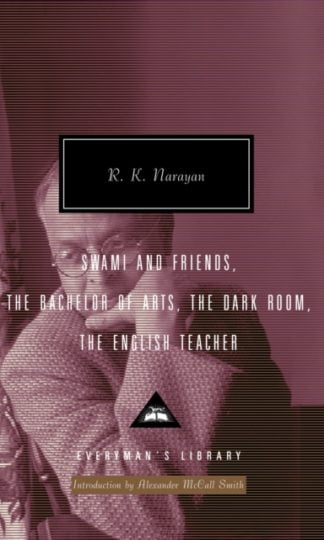 You're viewing: Swami and Friends, the Bachelor of Arts, the Dark Room, the English RM126.95
Add to cart
Join Waitlist We'll alert you as soon as the product comes back in stock! Please leave your email address and quantity sought in the fields below.