Susan Sontag was the most influential critic of her time. This second volume in Library of America’s definitive Sontag edition gathers all the collected essays and speeches from her last quarter-century, brilliant works whose subjects, from the AIDS epidemic, 9/11, the Iraq war, and the perverse allure of Fascism to painting, dance, music, film, and scintillating literary portraits of such writers as Walter Benjamin, Roland Barthes, Antonin Artaud, Machado de Assis, Jorge Luis Borges, Nadine Gordimer, Joseph Brodsky, W. G. Sebald, Marina Tsvetayeva, and Robert Walser, bear enduring witness to passionate curiosity and expansive intellect. She brings to every subject an unwavering focus and intensity, and a deep commitment to “extending our sense of what a human life can be,” as she said on accepting the Jerusalem Prize in 2000. An account of her 1993 residence in war-torn Sarajevo to stage a production of Waiting for Godot becomes a meditation on the meaning of culture: “Culture, serious culture, is an expression of human dignity-which is what people in Sarajevo feel they have lost.” AIDS and Its Metaphors marks a further development of the central ideas of her classic Illness as Metaphor, while Regarding the Pain of Others explores eloquently the troubling moral issues surrounding photographic depictions of violence, cruelty, and atrocity. 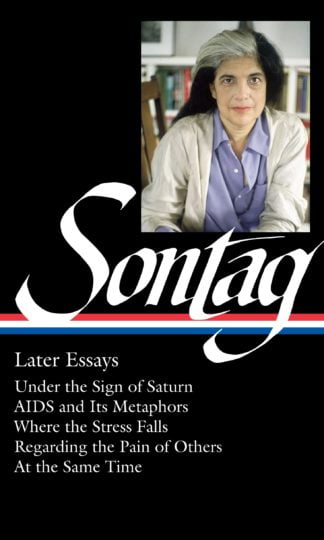 You're viewing: Sontag: Later Essays RM211.50
Add to cart
Join Waitlist We'll alert you as soon as the product comes back in stock! Please leave your email address and quantity sought in the fields below.