In the heady tradition of Raymond Chandler and Michael Connelly’ A. J. Finn, bestselling author of The Woman in the Window _____________ Former homicide detective Kosuke Iwata is on the run from his past . . . Five years ago, he lost his family. Now he may have found his redemption. Living in LA and working as a private detective, he spends his days spying on unfaithful spouses and his nights with an unavailable woman. Still he cannot forget the family he lost in Tokyo. But that all changes when a figure from his old life appears at his door demanding his help. Meredith Nichol, a transgender woman and his wife’s sister, has been found strangled on the lonely train tracks behind Skid Row. Soon he discovers that the devil is at play in the City of Angels and Meredith’s death wasn’t the hate crime the police believe it to be. Iwata knows that risking his life and future is the only way to silence the demons of his past. Reluctantly throwing himself back in to the dangerous existence he only just escaped, Iwata discovers a seedy world of corruption, exploitation and murder – and a river of sin flowing through LA’s underbelly, Mexico’s dusty borderlands and deep within his own past. _____________ ‘A dark, brutal ride through the underbelly of LA’ Anthony Horowitz Lays bare the bruised heart and broken soul of Los Angeles. Extraordinary . . . I’m awestruck’ A. J. Finn, author of international bestseller, The Woman in the Window ‘Masterpiece . . . you will love every minute’ Jeffery Deaver ‘A pacey, page-turning thriller’ Financial Times ‘Obregon keeps the unpredictable plot of Sins As Scarlet churning with myriad surprises that are grounded in believability’ Mail Online 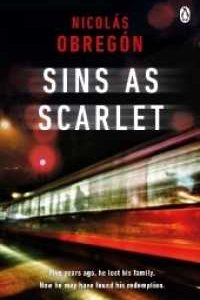 You're viewing: Sins As Scarlet RM52.50
Add to cart
Join Waitlist We'll alert you as soon as the product comes back in stock! Please leave your email address and quantity sought in the fields below.