Should We Stay or Should We Go?

‘Hilarious… Fiery phrases spit and crackle. Disgust expands and bursts into belly laughs… a very funny book’ Sunday Times
‘Thought-provoking, timely, and extremely funny’ Metro
‘Shriver said that her favourite novels are those that pack both an intellectual and emotional punch. With Should We Stay or Should We Go, she’s added triumphantly to their number’ The Times
‘Witty and thought-provoking’ Woman’s Weekly
‘I think Shriver’s novels are wonderful… fun, smart and, perhaps because of their author’s unconventional political views, unlike anything else you’ll read’ Financial Times
‘Entertaining and poignant’ Daily Mail
‘Very moving… Shriver has the magic ability to make the reader invested in the fate – fates, I should say – of her characters’ Daily Telegraph
‘Wickedly witty’ Spectator
‘Decidedly timely’ Scotsman
‘This sharp-elbowed satire is also a brusquely tender portrait of enduring love’ Washington Post

When her father dies, Kay Wilkinson can’t cry. Over ten years, Alzheimer’s had steadily eroded this erudite man. Surely one’s own father passing should never come as such a relief?

Both healthy and vital medical professionals in their early fifties, Kay and her husband Cyril have seen too many of their elderly NHS patients in similar states of decay. Determined to die with dignity, Cyril makes a modest proposal: they should agree to commit suicide together once they’ve both turned eighty. When their deal is sealed in 1991, the spouses are blithely looking forward to another three decades together.

But then they turn eighty.

By turns hilarious and touching, playful and grave, Should We Stay or Should We Go portrays twelve parallel universes, each exploring a possible future for Kay and Cyril, from a purgatorial Cuckoo’s-Nest-style retirement home to the discovery of a cure for ageing, from cryogenic preservation to the unexpected pleasures of dementia.

Weaving in a host of contemporary issues – Brexit, mass migration, the coronavirus –  Lionel Shriver has pulled off a rollicking page-turner in which we never have to mourn deceased characters, because they’ll be alive and kicking in the very next chapter. 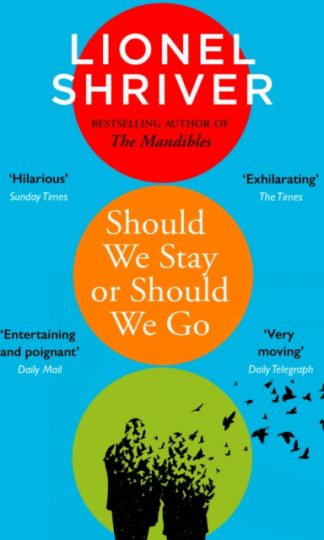 You're viewing: Should We Stay or Should We Go? RM56.95
Add to cart
Join Waitlist We'll alert you as soon as the product comes back in stock! Please leave your email address and quantity sought in the fields below.