Red Star Over Malaya is an account of the inter-racial conflicts between Malays and Chinese during the final stages and the aftermath of the Japanese occupation. As Japanese forces retreated into the big cities, the Chinese guerrillas of the communist-led resistance movement, the Malayan People’s Anti-Japanese Army (MPAJA), emerged from the jungle and took control of some 70 per cent of the country’s smaller towns and villages. The ensuing conflict involving the Malayan Communist Party, the Malay population and the British Military Administration marked a crucial stage in the history of Malaya. Based on extensive archival research in Malaysia, Great Britain, Japan and the United States, Red Star Over Malaya provides a riveting account of the way the Japanese occupation reshaped colonial Malaya, and of the tension-filled months that followed surrender. This book is fundamental to an understanding of social and political developments in Malaysia during the second half of the 20th century. First published in 1987, this book is a ‘must’ for any student of history in Southeast Asia. This edition contains a new foreword from the author. 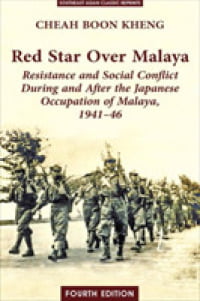 You're viewing: Red Star Over Malaya RM85.00
Add to cart
Join Waitlist We'll alert you as soon as the product comes back in stock! Please leave your email address and quantity sought in the fields below.