After the relative drought during the years since Malaysia first took to the vocation of writing verse in English in the nineteen fifties. we now have in this collection of poems by Malaysia millennials signs of coming shower. By their numbers, they show more clearly than before their diversity in communal origins, gender, cultural interest, and regional spread. As Malaysians, they have arrived, making a home here for poetry in English. Gone is the angst of the poets who began publishing in the fifties and sixties over a perceived exilic condition, the proper language to write in, the country’s cultural situation and the lack of literacy antecedents. The language in this collections, as may be expected, is very twenty-first century, a toned-down speech of conversation about ordinary things and everyday events in an urbanised environment. The collection marks on ongoing evolution of Malaysia poetry. I am optimistic that from the poets represented here, there will emerge at least two or three important voices in the decades ahead.

In this enterprising collection, new voices, while lamenting the loss of parents and grandparents, also illuminate, to celebrate the ironic ruptures between generations. Their words, original and edgy, splice paradox and heterodoxy, as in a poem’s title, “How to paint the rainbow when you’re colour blind.” Or in declaring to Anglophone readers in an ESL nation, “My mother’s handwriting is neurotic, / perfectly curved in large loops and small squiggles./ You can tell, English is not her fist language – / each letter is painstakingly formed, as if wary of mistake. / [But] My handwriting is intentional, as is my education. / You can tell, English is my language.” In a multilingual world where so much seems “lost in translation,” “nothing’s lost. Or else : all is translation / And every bit of us is lost in it. / And in that loss, a self-effacing tree, / To shade and fibre, milk and memory.” These poems make Malaysia new again, in imagination, in a monsoon country, where “A man stands by the side of the river / with a fever so hot / that it might run away with him / [and] One family takes in a whole clan / of tortoises, beady eyes reflecting centuries / of cyclical movement.” 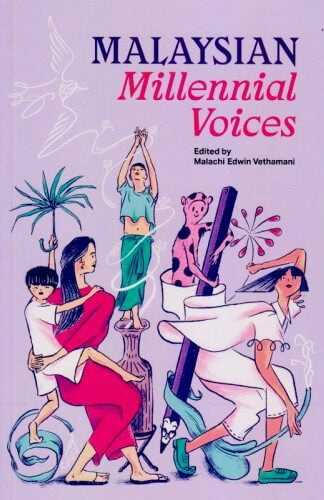 You're viewing: Malaysian Millenial Voices RM25.00
Add to cart
Join Waitlist We'll alert you as soon as the product comes back in stock! Please leave your email address and quantity sought in the fields below.