I Am A Cat: The Manga Edition

Soseki Natsume’s comic masterpiece, I Am a Cat, satirizes the foolishness of upper-middle-class Japanese society in early 20th century Tokyo. Written with biting wit and sardonic perspective, it follows the whimsical adventures of a rather cynical stray kitten. He finds his way into the home of an English teacher, where his running commentary on the follies and foibles of the people around him has been making readers laugh for more than a century.

This is the very first manga edition in English of this classic piece of Japanese literature. The story lends itself well to a graphic novel format, allowing readers to pick up on the more subtle cues of the expressive cat, while also being immersed in the world of his perceptive narration. It is true to classic manga form, and is read back to front.

The cast of characters includes:Kushami-His master, who is not good at his job and quite stupidThe Kenedas-A conceited couple with a spoiled daughterMeitei-Kushami’s friend who is fond of jokes and tall talesA group of local cats including lovely Mikeko, and violent KuroBeautifully illustrated by Japanese artist Chiroru Kobato, this edition provides a visual, entertaining look at a unique period in Japan’s history-filled with cultural and societal changes, rapid modernization and a feeling of limitless possibility-through the eyes of an unlikely narrator. 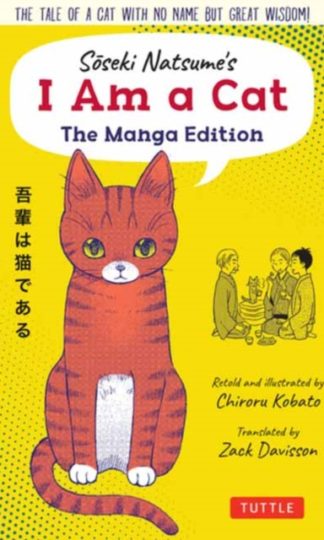 You're viewing: I Am A Cat: The Manga Edition RM60.50
Add to cart
Join Waitlist We'll alert you as soon as the product comes back in stock! Please leave your email address and quantity sought in the fields below.