IN THIS VOLUME: Once Upon A Time: The Greek Taverna by Petros Markaris・Land of Migration by Matteo Nucci・The Lost Generation by Christos Ikonomou・plus: Yorgos Lanthimos and the “Weird Wave” of Greek cinema, the island where people forget to die, the NBA’s most valuable player, the mayor who balanced the books but enraged the nationalists, abandoned buildings, oligarchs on the rise, the rebellious rhythm of rebetiko and much more…

Few countries have received more media attention in recent years and even fewer have been represented in such vastly divergent ways. There’s a downside to all this attention: everyone seems to have something final to say about Greece. News headlines replace people’s individual stories, impressions substitute facts, characters take the place of people.

In this volume of The Passenger, we chose to set those opinions aside in order to give to the stories, facts, and people of Greece the dignity and centrality they deserve.

“On the Greek island of Ikaria, life is sweet . . . and very, very long. What is the locals’ secret?” from The Island of Long Life by Andrew Anthony

What is The Passenger?
The Passenger collects the best long-form essays, investigative journalism, literary reportage, and visual narratives in order to tell the story of a country or city and to portray its shifting culture and identity, its public debates, the sensibilities of its people, its burning issues, conflicts, and open wounds. Taken together, these fragments form a novel, complex picture. 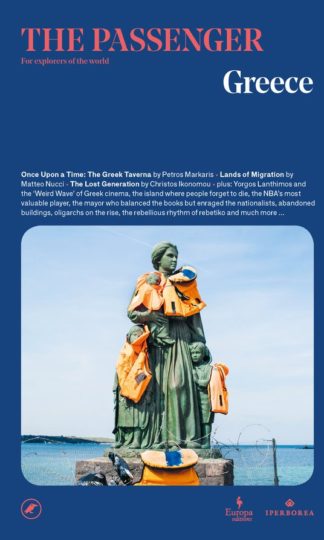 You're viewing: The Passenger #2: Greece RM110.50
Add to cart
Join Waitlist We'll alert you as soon as the product comes back in stock! Please leave your email address and quantity sought in the fields below.