The inaugural volume of Library of America’s Ursula K. Le Guin edition gathers her complete Orsinian writings, enchanting, richly imagined historical fiction collected here for the first time. Written before Le Guin turned to science fiction, the novel Malafrena is a tale of love and duty set in the central european country of Orsinia in the early nineteenth century, when it is ruled by the Austrian empire. The stories originally published in Orsinian Tales (1976) offer brilliantly rendered episodes of personal drama set against a history that spans Orsinia’s emergence as an independent kingdom in the twelfth century to its absorption by the eastern Bloc after World War II. The volume is rounded out by two additional stories that bring the history of Orsinia up to 1989, the poem “Folksong from the Montayna Province,” Le Guin’s first published work, and two never before published songs in the Orisinian language.

LIBRARY OF AMERICA is an independent nonprofit cultural organization founded in 1979 to preserve our nation’s literary heritage by publishing, and keeping permanently in print, America’s best and most significant writing. The Library of America series includes more than 300 volumes to date, authoritative editions that average 1,000 pages in length, feature cloth covers, sewn bindings, and ribbon markers, and are printed on premium acid-free paper that will last for centuries. 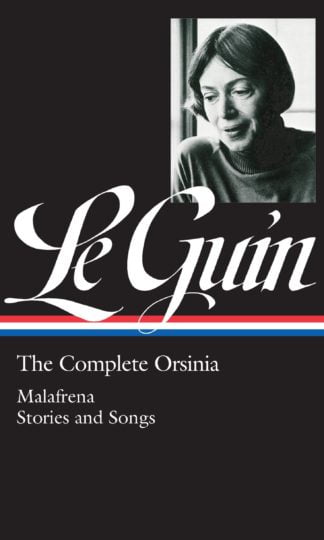 You're viewing: Ursula K. Le Guin: The Complete Orsinia: Malafrena/Stories and Songs (Library of America Edition) RM164.50
Add to cart
Join Waitlist We'll alert you as soon as the product comes back in stock! Please leave your email address and quantity sought in the fields below.