Comic Classics: Sherlock Holmes and the Hound of the Baskervilles

OLD books get NEW doodles – it’s the classics as you’ve never seen them before! A hilarious new series that brings the classics to life with illustrations by Jack Noel. Perfect for 7 – 9 year olds and fans of Tom Gates, Wimpy Kid and Dav Pilkey. And SHERLOCK HOLMES! Solve a SPOOKY MYSTERY with Holmes and Watson …

but BEWARE OF THE DOG! The world’s most famous detective, Sherlock Holmes, and his best buddy, John Watson, face their most curious case yet, when they investigate the mysterious death of Sir Charles Baskerville. Could it be linked to the ghostly hound that has haunted the family for centuries? A thrilling tale of mystery, murder and things that go woof in the night. Look out for more COMIC CLASSICS: TREASURE ISLANDClimb aboard with Jim Hawkins, a chatty parrot and a bunch of crazy pirates for a hilarious adventure across the seven seas. 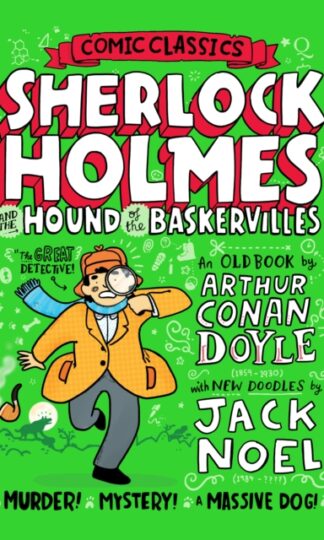 You're viewing: Comic Classics: Sherlock Holmes and the Hound of the Baskervilles RM53.90
Add to cart
Join Waitlist We'll alert you as soon as the product comes back in stock! Please leave your email address and quantity sought in the fields below.