A spirited, engaging investigation into the concept of character, an enduring human obsession in literature, psychology, politics, and everyday life.

Since at least Aristotle’s time, philosophers, theologians, moralists, artists, and scientists have pondered the enigma of human character. In its oldest usage, “character” derives from a word for engraving or stamping, yet over time, it has come to mean a moral idea, a type, a literary persona, and a physical or physiological manifestation observable in works of art and scientific experiments. It is an essential term in drama and the focus of self-help books.

In Character: The History of a Cultural Obsession, Marjorie Garber points out that character seems more relevant than ever today, omnipresent in discussions of politics, ethics, gender, morality, and the psyche. References to character flaws, character issues, and character assassination and allegations of “bad” and “good” character are inescapable in the media and in contemporary political debates. What connection does “character” in this moral or ethical sense have with the concept of a character in a novel or a play? Do our notions about fictional characters catalyze our ideas about moral character? Can character be “formed” or taught in schools, in scouting, in the home? From Plutarch to John Stuart Mill, from Shakespeare to Darwin, from Theophrastus to Freud, from nineteenth-century phrenology to twenty-first-century brain scans, the search for the sources and components of human character still preoccupies us.

Today, with the meaning and the value of this term in question, no issue is more important, and no topic more vital, surprising, and fascinating. With her distinctive verve, humor, and vast erudition, Marjorie Garber explores the stakes of these conflations, confusions, and heritages, from ancient Greece to the present day. 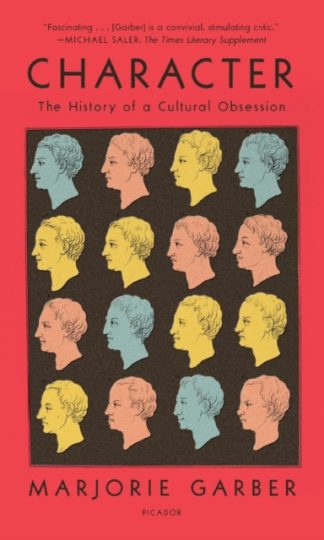 You're viewing: Character RM89.90
Add to cart
Join Waitlist We'll alert you as soon as the product comes back in stock! Please leave your email address and quantity sought in the fields below.