Published simultaneously in London and Paris in 1816, Adolphe is the story of a tragic love affair between its narrator and his lover Ellenore, two characters locked into a fatal dance of self-destruction. In what is one of the earliest examples of autofiction, from a period when all creative endeavour was permeated by autobiography. Constant’s aim was to create an exemplary fiction of high moral purpose which would also function as an act of intimate self-vindication and revenge on his former lover, the formidable Madame de Stael.

The result is a tautly-strung Racinian tragedy in prose. Soon after publication, Constant was defending himself from charges that he had written a novel based on real people, which he strenuously denied. The work was translated into English by Alexander Walker, and overseen by the author, resulting in what Richard Sieburth describes as ‘an eccentrically bevelled jewel of Regency prose’.

This riverrun edition publishes Walker’s translation and Constant’s preface in a new edition here for the first time since 1817. 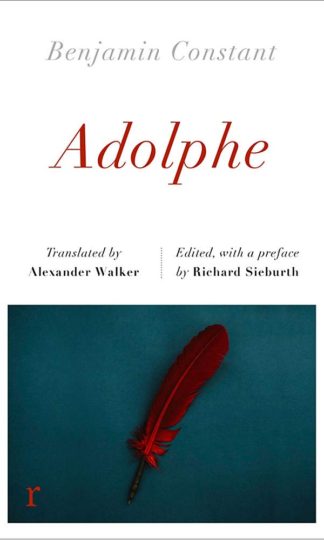 You're viewing: Adolphe RM60.90
Add to cart
Join Waitlist We'll alert you as soon as the product comes back in stock! Please leave your email address and quantity sought in the fields below.