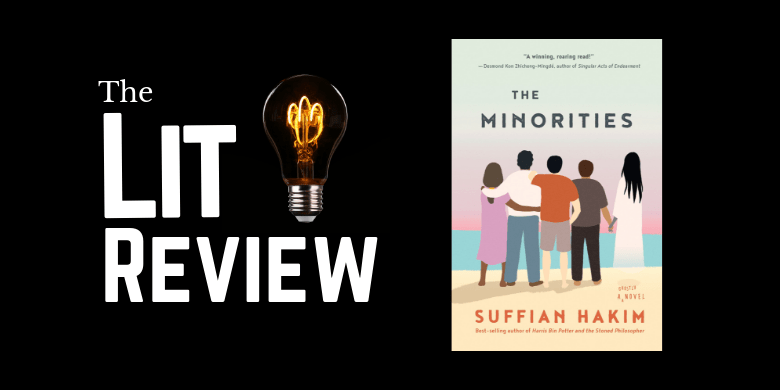 Who: Suffian Hakim is a Singaporean writer whose first book Harris bin Potter and the Stoned Philosopher became an instant cult favourite. The Minorities, another parody, is his second book published by Singapore-based Epigram. Epigram will also be re-releasing Haris bin Potter later in the year.

What: The Minorities is the story of an unlikely group of housemates, each of whom are haunted by their metaphorical ghosts and demons before they encounter a real, true-to-life pontianak (vampire of Malay folklore), which disrupts their domestic tableau.

The story is told from the perspective of our unnamed protagonist, a Jewish-Muslim Chinese-Malay man whom we are told has a unique and strange moniker which is never revealed to us. We find out early in the book that our protagonist is reeling from the recent death of his father, which has in turn planted in him a deeply rooted obsession with getting his father’s ghost to haunt him. Taking his late father’s final warning to heart — “If you do anything stupid in here, like bringing home whores, I swear to Allah that I will haunt you and kill any ghostbusters you’re gonna call” — our protagonist proceeds to engage in any number of whorish activities.

Despite his questionable motives, he is at the core, a compassionate chap and turns his house into a sanctuary of sorts for the runaways that he encounters. His unlikely housemates — lab colleague Shanti, a Bangladeshi foreign construction worker named Cantona and foreign Chinese sewerage engineering worker Tights — are fleeing their respective pasts in search of brighter futures, and somehow find their fates entwined with each other and the unnamed protagonist. They are steadily making progress towards a better life when everything is derailed by an unfortunate shit in the woods.

Why: Reading Suffian Hakim’s The Minorities was probably the most fun I’ve had reading a novel in a while, which caught me by surprise. Of greater surprise was how I came to feel that the novel, despite being a parody or perhaps because of the fact of its being parody, was a more authentic expression of our regional voice than other purportedly serious literary titles from the region. I acknowledge that this is a dangerous claim to make; please note that I am not saying that The Minorities is the best literary work to emerge from the region. What I am saying is that The Minorities feels like home in ways that other books fail to do.

To be fair, the previous statement, if true, is more likely a reflection on the reader than the book itself. Malaysians, particularly those such as myself who do not have strong identifications with their ethnic grouping, gravitate towards an identity that is a pastiche of various cultures. The pastiche that emerges exaggerates features borrowed from the contributing cultures, which is why the line by one of the characters in the middle of the novel — “The power of Tights compels you!” and “dejan summerknock!” — sent me into a laughing fit when I was reading in bed next to my bemused wife.

The entirety of The Minorities, from its structure to its dialogue and plot-line, is parodic. In the book, you will find:

The Minorities is a fun book. It probably won’t make you stop and think about ‘serious stuff’ like labour diaspora and the impact of displacement onto the psyche of foreign labourers and such. But then again, it just might. (No, it probably won’t).

Verdict: Fun, compulsive, whimsical, creative, unpretentious — the most fun I’ve had with a book in a while. (9/10)

Nota Bene: Suffian will be appearing in our store in July to talk about The Minorities and also the re-release of Haris bin Potter. Keep watching this space for more information coming up!