Venture Forth: Untold Stories of a Culture Junkie

Wendy has been travelling since her college days. The first taste of the wild in Tibet cultivated her interest to take the less travelled routes to seek out the hidden gems. Her initial interest was in chasing cultures and languages exchanged along the ancient Silk Road. The curiosity then expanded her travel to other parts of the world and she has already set foot in all the seven continents.

When she started doing freelancing work later in her career, she has more opportunity to travel longer and seeing each culture in more details. Started travelling with friends and later, travelling alone but not lonely, open up more opportunities for her to meet the local people. Interacting with the locals and learning about their lives is her way of travelling. This is a compilation of short stories of her travelling experiences, some humourous, some a bit scary but all ended up well as she met many ‘angels’ who helped her when she needed them.

The book is written in a story-telling way, making it a light and interesting read. It is also hope that this book will inspire people, especially woman, regardless of one’s age, to travel. Travel opens up one’s mind where a culture & lifestyle that may seem ridiculous initially becomes acceptable and tolerable. Isn’t that the way to attain a peaceful world where a colourful group of people with different cultures and lifestyles share the earth? 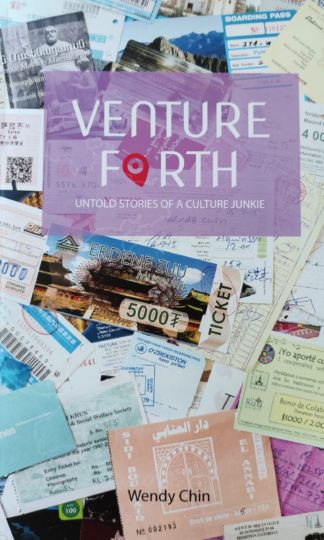 You're viewing: Venture Forth: Untold Stories of a Culture Junkie RM40.00
Add to cart
Join Waitlist We'll alert you as soon as the product comes back in stock! Please leave your email address and quantity sought in the fields below.