What we can learn from a Renaissance nowhere In 1516, a book was published in Latin with the enigmatic Greek-derived word as its title. Utopia-which could mean either “good-place” or “no-place”-gives a traveler’s account of a newly discovered island somewhere in the New World where the inhabitants enjoy a social order based purely on natural reason and justice. As the traveler describes the harmony, prosperity, and equality found there, a dramatic contrast is drawn between the ideal community he portrays and the poverty, crime, and often frightening political conditions of 16th century Europe.

Written by Sir Thomas More (1477-1535)-then a rising intellectual star of the Renaissance and ultimately the advisor and friend of Henry VIII who was executed for his devoutly Catholic opposition to the king-Utopia is as complex as its author. In the form of a Platonic dialogue, Utopia explores topics such as money, property, crime, education, religious tolerance, euthanasia, and feminism. Claimed as a paean to communism (Lenin had More’s name inscribed on a statue in Moscow) as often as it has been seen as a defense of traditional medieval values, Utopia began the lineage of utopian thinkers who use storytelling to explore new possibilities for human society-and remains as relevant today as when it was written in Antwerp 500 years ago.

Explore the issues like feminism, euthanasia, and equality through Renaissance eyes Early communist tract or a defense of medieval values? You decide. Peer inside the enigmatic mind of the man who dared stand up to Henry VIII Appreciate the postmodern possibilities of Platonic dialogue Part of the bestselling Capstone Classics series edited by Tom Butler-Bowdon, this edition features an introduction from writer, economist, and historian Niall Kishtainy. 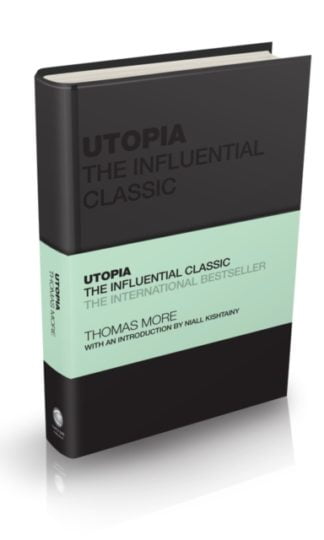 You're viewing: Utopia RM55.90
Add to cart
Join Waitlist We'll alert you as soon as the product comes back in stock! Please leave your email address and quantity sought in the fields below.