SHORTLISTED FOR THE ROYAL SOCIETY INSIGHT INVESTMENT SCIENCE BOOK PRIZE 2019. ‘An accessible primer on all things quantum’ – Sunday TimesQuantum physics is strange. It tells us that a particle can be in two places at once.

Indeed, that particle is also a wave, and everything in the quantum world can be described entirely in terms of waves, or entirely in terms of particles, whichever you prefer. All of this was clear by the end of the 1920s. But to the great distress of many physicists, let alone ordinary mortals, nobody has ever been able to come up with a common sense explanation of what is going on.

Physicists have sought ‘quanta of solace’ in a variety of more or less convincing interpretations. Popular science master John Gribbin takes us on a delightfully mind-bending tour through the ‘big six’, from the Copenhagen interpretation via the pilot wave and many worlds approaches. All of them are crazy, and some are more crazy than others, but in this world crazy does not necessarily mean wrong, and being more crazy does not necessarily mean more wrong. 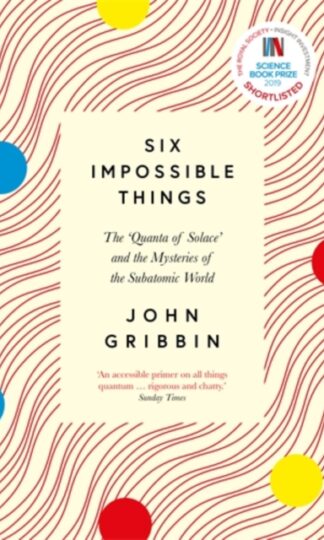 You're viewing: Six Impossible Things RM52.50
Add to cart
Join Waitlist We'll alert you as soon as the product comes back in stock! Please leave your email address and quantity sought in the fields below.