Malachi Edwin’s poems map out the condition of modern love in this country. It is a comprehensive map of 215t century love and its losses and failures. — Wong Phui Nam, poet and critic

Deceptively simple and ingenuous, Malachi Edwin’s unpretentious poems risk schmaltz by taking on the largest topic of love: what love can still mean in our age of political correctness, especially in the less knowable ways in which love transcends the body and the interpersonal self. — Cyril Wong, poet and fictionist

Malachi Edwin’s Complicated Lives offers a rich throve of uncommon Malaysian stories distinctive in their local, Tamil and sexual passions, stretching from childhood to intimations of mortality, each poem another glimpse of ‘Reality [that] is but a shade of illusion.’ — Shirley Geok-lin Lim, poet and writer

Simplicity of language and phrase-making are the hallmarks of Malachi Edwin Vethamani’s poetry. Feelings, events, non-events, happenings — Life Happens as a natural course of action — and he records them with sensitivity that only an acute poet’s eye and ear can do. More importantly, he explores important issues such as the complications and fractures of longing, heartbreak, exile and sexuality in Malaysian society. — Sudeep Sen, poet and editor

There is a lot more to be said about the poems. But because no two people ever read the same poem in the same way, I would urge you to read the poems and make your own discoveries. And because we often find new things in poems when we re-read them, the tonal and emotional density of the poems makes Life Happens a collection you want to keep. — Chuah Guat Eng, novelist and critic 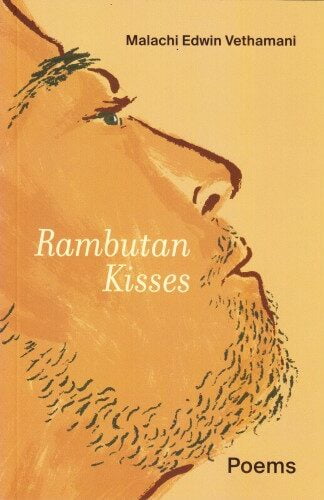 You're viewing: Rambutan Kisses RM25.00
Add to cart
Join Waitlist We'll alert you as soon as the product comes back in stock! Please leave your email address and quantity sought in the fields below.