Our Man In Havana

WITH AN INTRODUCTION BY CHRISTOPHER HITCHENS ‘Graham Greene had wit and grace and character and story and a transcendent universal compassion that places him for all time in the ranks of world literature’ John Le Carre Wormold is a vacuum cleaner salesman in a city of power cuts. His adolescent daughter spends his money with a skill that amazes him, so when a mysterious Englishman offers him an extra income he’s tempted. In return all he has to do is carry out a little espionage and file a few reports. But when his fake reports start coming true, things suddenly get more complicated and Havana becomes a threatening place. 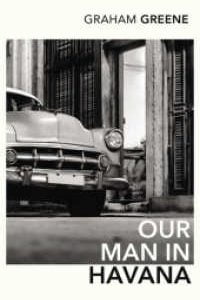 You're viewing: Our Man In Havana RM51.90
Add to cart
Join Waitlist We'll alert you as soon as the product comes back in stock! Please leave your email address and quantity sought in the fields below.