“The papers composing this volume treat of the inner rather than of the outer life of Japan, for which reason they have been grouped under the title Kokoro (heart). [This] word signifies also mind, in the emotional sense; spirit; courage; resolve; sentiment; affection; and inner meaning, just as we say in English, “the heart of things.” –Lafcadio HearnAs an interpreter of Japan for the West, Lafcadio Hearn has no peer. His books are still read with fascination by foreigners and Japanese alike–a tribute to his keen powers of observation and the vividness of his prose.

Kokoro is Hearn’s love letter to Japan–his exploration of the genius of Japanese civilization and the wonder he felt at encountering these islands and their inhabitants. The 15 extraordinary stories in this book include:”Kimiko”– A beautiful geisha hatches a desperate plan to save her mother from poverty but then must make a heartbreaking choice. “A Conservative”– A samurai’s son embraces the West and travels to Europe but finds his new home to be a shallow and faithless land.

“A Street Singer”– A woman captivates crowds with the beauty of her voice, but her life story goes much deeper than her musical talents. “By Force of Karma”– The peculiar tale of a Buddhist priest who receives a letter from a mysterious woman and ultimately takes his own life. Published six years after Hearn arrived in Japan, these stories focus on the inner spiritual life of the Japanese.

Sometimes touching and always compelling, they are drawn from Hearn’s own experiences, telling stories of the people and customs that still make Japan so unique. Kokoro includes an informative foreword by Patricia Welch which highlights how, 125 years later, our understanding of Japan can still be deepened by Hearn’s heartfelt prose. 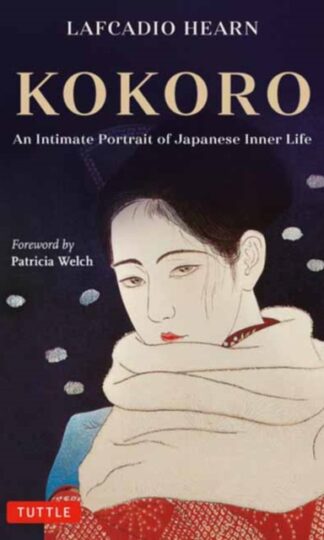 You're viewing: Kokoro RM60.00
Add to cart
Join Waitlist We'll alert you as soon as the product comes back in stock! Please leave your email address and quantity sought in the fields below.