The first photographic record of a Penang clan jetty by one of Malaysia’s most prominent photographers.

Koay Jetty Penang – 25 Years Apart is the first photographic record of a Penang clan jetty. Its publication is especially poignant as the Jetty was demolished to make way for a highway and residential project in 2006.

Dr Ooi Cheng Ghee’s photographs document the Koay Jetty’s slow decline and the lives of its Chinese working-class inhabitants in two separate tranches spread over twenty five years. Koay Jetty Penang – 25 Years Apart reveals the lost history of the Koay Jetty for the very first time, capturing the hardships of life juxtaposed against the relentless encroachment of the modern world.

Dr Ooi Cheng Ghee was born in Penang, Malaysia in 1944. He began photographing at the age of twenty-five after completing his studies in medicine at the University of Singapore. After an early association with the Photographic Society of Penang he turned his attention to exploring the technical and expressive possibilities of social documentary photography. Two major photo essays followed: Little India and Koay Jetty. In 1978 he was elected as an Associate of the Royal Photographic Society, United Kingdom, and has also held solo exhibitions at various galleries. He continues to live in Penang, Koay Jetty Penang – 25 Years Apart is his second book. 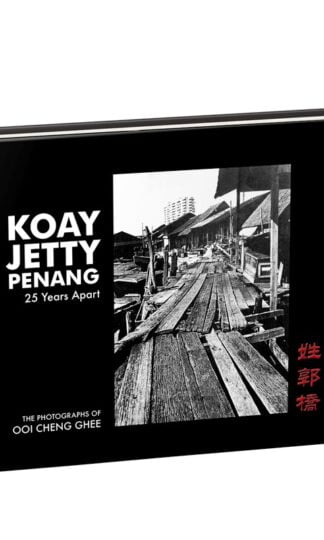 You're viewing: Koay Jetty Penang RM160.00
Add to cart
Join Waitlist We'll alert you as soon as the product comes back in stock! Please leave your email address and quantity sought in the fields below.