For the first time, the full story of the conflict between two of the twentieth century’s most important thinkers—and how their profound disagreements continue to offer important lessons for political theory and philosophy

Two of the most iconic thinkers of the twentieth century, Hannah Arendt (1906–1975) and Isaiah Berlin (1909–1997) fundamentally disagreed on central issues in politics, history and philosophy. In spite of their overlapping lives and experiences as Jewish émigré intellectuals, Berlin disliked Arendt intensely, saying that she represented “everything that I detest most,” while Arendt met Berlin’s hostility with indifference and suspicion. Written in a lively style, and filled with drama, tragedy and passion, Hannah Arendt and Isaiah Berlin tells, for the first time, the full story of the fraught relationship between these towering figures, and shows how their profoundly different views continue to offer important lessons for political thought today. Drawing on a wealth of new archival material, Kei Hiruta traces the Arendt–Berlin conflict, from their first meeting in wartime New York through their widening intellectual chasm during the 1950s, the controversy over Arendt’s 1963 book Eichmann in Jerusalem, their final missed opportunity to engage with each other at a 1967 conference and Berlin’s continuing animosity toward Arendt after her death. Hiruta blends political philosophy and intellectual history to examine key issues that simultaneously connected and divided Arendt and Berlin, including the nature of totalitarianism, evil and the Holocaust, human agency and moral responsibility, Zionism, American democracy, British imperialism and the Hungarian Revolution. But, most of all, Arendt and Berlin disagreed over a question that goes to the heart of the human condition: what does it mean to be free? 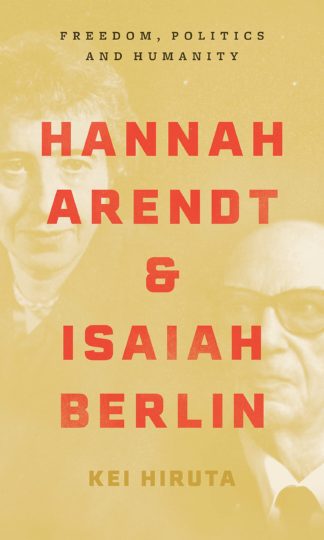 You're viewing: Hannah Arendt and Isaiah Berlin: Freedom, Politics and Humanity RM169.00
Add to cart
Join Waitlist We'll alert you as soon as the product comes back in stock! Please leave your email address and quantity sought in the fields below.