A Study in Scarlet

When Dr Watson meets Sherlock Holmes for the first time the ‘consulting detective’ immediately demonstrates his inimitable powers of observation, deducing that the doctor has returned to convalesce from a wound received during military service in Afghanistan. The two young men agree to share lodgings at 221B Baker Street, and it is not long before Holmes’s faculties are put to a more practical use. Inspector Gregson of Scotland Yard asks for help in solving what he describes as ‘a puzzler’: a man has been discovered dead, surrounded by blood―but with no wounds upon him.

First appearing in Beeton’s Christmas Annual in 1887, A Study in Scarlet marked the start of one of the most iconic partnerships in literature. All the ingredients of the friendship between Holmes and Watson which permeate the later stories can be found in this opening adventure; it is no surprise that once launched upon the reading public, Holmes and Watson continued their collaboration for another thirty years.

The Baker Street Classics Sherlock Holmes collection is a retro-inspired full set of Arthur Conan Doyle’s wonderful tales of the inimitable ‘consulting detective’ at work. Featuring original cover illustrations from editions of the 1920s, this collection will adorn any book-lover’s shelf and transport the reader back in time to Holmes’s bustling Victorian London, the misty moors of Dartmoor, the dizzying heights of Reichenbach and the cosy living room of 221B Baker Street. 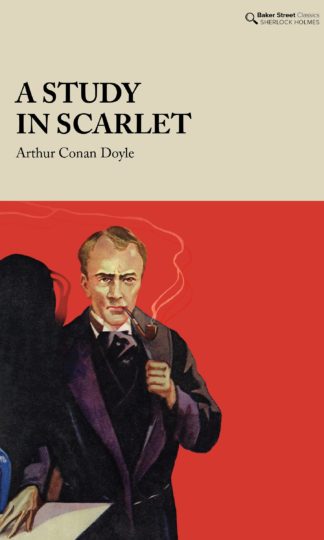 You're viewing: A Study in Scarlet RM89.90
Add to cart
Join Waitlist We'll alert you as soon as the product comes back in stock! Please leave your email address and quantity sought in the fields below.