What I Saw in Malaya compiles early 20th-century French anthropologist Jeanne Cuisinier’s lectures and methods on observing the lives of Malayan peoples she encountered. Cuisinier has been presented as an anthropologist with an academic yet affectionate attitude towards her Malayan subjects, a gentle presence in Malaya that can shed light on the lifestyles of Malayans to her previously French and now, modern Malaysian audience.

However, can there be more information to be extracted from What I Saw in Malaya? What questions do we probe of it for different types of information? How do we situate the text in the dynamics of its time? How do we compare the gaze of the colonial anthropologist to the gaze of colonial writers like Anthony Burgess and colonial officers like Frank Swettenham?

Dr. Fiona Lee, specialist in postcolonial studies and 20th- and 21st- century literature, leads our book discussion on dissecting the intricacies of What I Saw in Malaya. This session will be moderated by Qaleeda Talib.

The book is available in-store at RM25. 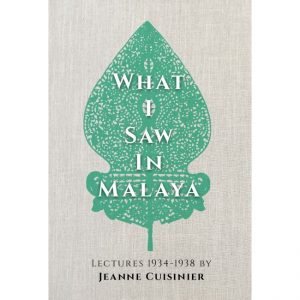