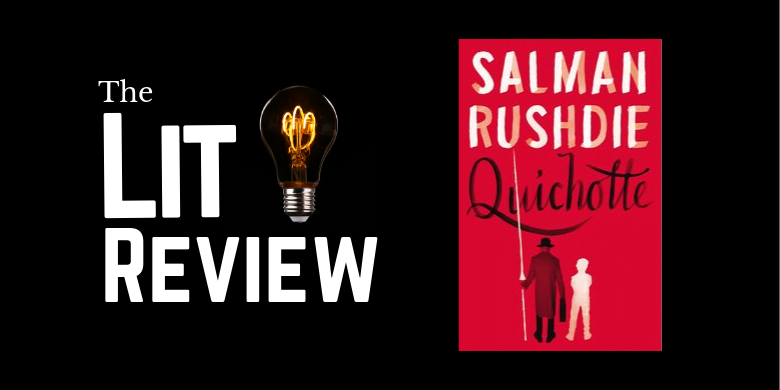 Who: Sir Salman Rushdie is an award-winning British Indian writer who needs no introduction. The winner of multiple awards and honours, Rushdie’s vast body of work include Midnight’s Children, The Ground Beneath Her Feet, Joseph Anton, and the controversial Satanic Verses. He has also written a children’s book, Haroun and the Sea of Stories, as well as multiple works of non-fiction.

What: Quichotte is both a homage to Cervantes’ Don Quixote and to the maximalist form of writing. Hubris and bombast is de rigeur — or perhaps more pertinently, de Rushdie — and the scope of the narrative is once again mind-bogglingly wide. Rushdie borrows heavily from popular culture, science fiction, fantasy, and of course, from Cervantes, to put together Quichotte which can be regarded as a return to form after the stilted Golden House effort of 2017.

In a nutshell — if that is at all possible — Quichotte follows the quest of an Indian-American salesman who has fallen in true love with the Oprah-esque Salma R., a shrewd Indian actress who has become the new diva of afternoon talk TV. With his clasically-trained brain rotted on a steady diet of primetime television, the eponymous Quichotte believes he must embark on a quest to prove his worthiness of Ms. Salma R., interpreting the signs and omens along the way as only a pop culture fanatic (or David Foster-Wallace) can:

“As I plan my quest,” Quichotte said, “I ponder the contemporary period as well as the classical. And by the contemporary I mean, of course, The Bachelorette…[t]he searcher for love must understand immediately, at the outset of his search, that the quantity of love available is far too small to satisfy the number of searchers.”

But quests are not all created equal. While Quixote had his windmills and dragons — imaginary dangers that are in actuality quite innocuous — Quichotte’s challenges are quite the opposite. Together with his dreamed up son/squire Sancho, our knight errant must deal with the challenges of a bigoted Trumpian America, the opioid crisis (topical!), estrangement from a sibling known only as the Human Trampoline (HT for short) and a physical development that may or may not herald the literal end of the world.

But wait! It doesn’t end there.

It turns out that Quichotte may very well just be the figment of the imagination — the last gasp of effort by a third-rate Indian American spy novelist who is making for one last grasp at respectability with his retelling of Don Quixote! Not coincidentally, the author of Quichotte grapples with much of the same issues faced by his addled protagonist and thus intertwine the threads of fact and fiction, which incidentally feeds nicely into Rushdie’s penchant for multiverse theory (see Ground Beneath Her Feet).

The author, allusively known (or perhaps not), only as Author or Brother has sibling issues with the enigmatic Sister, who has come good in her clamber up the ladder of ambition, but nevertheless finds her otherwise fabulous life interrupted by an unseen foe. Like Quichotte, Brother needs to reconcile with his fragmented family before he can complete his own quest, which in this case is finishing his book before an irritating heart murmur finishes him.

Why: Why does anyone read Rushdie? Is there room for bombast and hyperbole in this modern age where everyone is Marie Kondo-ing the hell out of everything, including prose? Can sleek Swedish furniture design not cohabitate with baroque and gilded rooms? One suspects that Quichotte makes the argument that it can, and it should.

In many ways, Quichotte is an exemplary Best of Rushdie, with the New York Times reviewer complaining that one could check off all the boxes in a Rushdie Trope Bingo Card, just as one could with Murakami’s card with Killing Commendatore. Multiverses? Check. Multitudinous references to popular culture characters and/or tropes? Check. Homages to literary classics? Check. Cheeky insertion of the self into the narrative? Check, check, and check.

Indeed, Rushdie dips into kitsch so often throughout the book that it almost feels as though one were watching a Wes Anderson movie with Alec Baldwin as the narrator. And just as Anderson makes entertaining movies, Rushdie writes entertaining, if not always “meaningful”, books. Of course, he brandishes his own get-out-of-jail free card when he reminds us, through his description of Salma R., that, “A woman whose life was lived on the surface, who had chosen superficiality, had no right to complain about the absence of depth”.

But it would be wrong to dismiss Quichotte as pure camp as Rushdie can still be a master of lucid prose when he chooses to be — although perhaps not when he is channeling the inner-monologue of a teenager trying to sound hip. Structure wise, there does seem to be a significant imbalance in the overall feel of the book, almost as though the author was forced to chop out vast sections by a less compassionate editor. But we can only speculate.