The Social Contract And The First And Second Discourses

Jean-Jacques Rousseau’s ideas about society, culture, and government are pivotal in the history of political thought. His works are as controversial as they are relevant today. This volume brings together three of Rousseau’s most important political writings-The Social Contract and The First Discourse (Discourse on the Sciences and Arts) and The Second Discourse (Discourse on the Origin and Foundations of Inequality)-and presents essays by major scholars that shed light on the dimensions and implications of these texts.

Susan Dunn’s introductory essay underlines the unity of Rousseau’s political thought and explains why his ideas influenced Jacobin revolutionaries in France but repelled American revolutionaries across the ocean. Gita May’s essay discusses Rousseau as cultural critic. Robert N. Bellah explores Rousseau’s attempt to resolve the tension between the individual’s desire for freedom and the obligations that society imposes. David Bromwich analyzes Rousseau as a psychologist of the human self. And Conor Cruise O’Brien takes on the “noxious,” “deranged” Rousseau, excoriated by Edmund Burke but admired by Robespierre and Thomas Jefferson. Written from different, even opposing perspectives, these lucid essays convey a sense of the vital and contentious debate surrounding Rousseau and his legacy.

For this edition Susan Dunn has provided a new translation of the Discourse on the Sciences and Arts and has revised a previously published translation of The Social Contract. 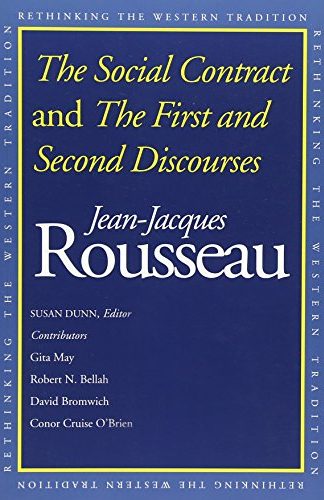 You're viewing: The Social Contract And The First And Second Discourses RM92.00
Add to cart
Join Waitlist We'll alert you as soon as the product comes back in stock! Please leave your email address and quantity sought in the fields below.