Fully-illustrated, The Passenger collects the best new writing, photography, art and reportage from around the world.

・ Night, Sleep, Death and the Stars by Lauren Groff
・ The Universe Underground by Paolo Giordano
・ We All Hated Each Other So Much by Frank Westermann
・ plus: discovering new planets and destroying satellites; returning to the Moon (this time to stay); the Mars delusion; the hunt for extraterrestrial life, and much more…

In the 1960s, the rivalry between the superpowers brought us into space, adding a whole new dimension to human life. The last frontier was open, the solar system seemed close at hand, Mars was the next step… Then, nothing.

Between 1969 and 1972 twelve men (but no women) walked on the moon, but no one has since. The space race between the United States and the Soviet Union revealed itself for what it really was: a political and military competition between opposing nationalist narratives. Space agencies, however, have not been idle since the 1970s–quite the opposite. While funding for space missions has been cut and their objectives have changed, humanity has continued to explore the solar system with probes and robots, less costly than human astronauts, and has observed celestial bodies more closely than ever before.

Without politics, science has thrived. But the lack of government funding has also opened space exploration to the forces of capitalism. NASA and other space agencies rely more and more on private companies to build modules and rockets, and a generation of visionary and megalomaniac entrepreneurs has become determined to bring humans back to space, this time to stay. The race has started again, with different rules and different players in an increasingly multipolar world.

But for those of us who remain on Earth, space also offers something else–a spiritual dimension, which science keeps alive by seeking answers to fundamental questions: what is the universe made of? How did the solar system form? What are the origins of life? And while colonizing Mars might not be the solution to humanity’s problems, the promise of space–whether expressed in a tweet by Elon Musk or a photo taken by a NASA rover on Mars–is to finally demonstrate that, when necessary, we are able to work together to build a common future for the whole of humanity. 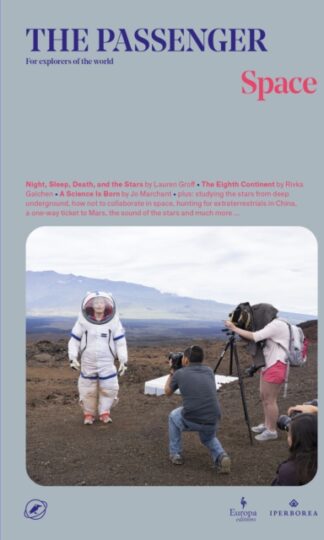 You're viewing: Space (The Passenger) RM114.95
Add to cart
Join Waitlist We'll alert you as soon as the product comes back in stock! Please leave your email address and quantity sought in the fields below.