PREORDER: The First Decade: My Journey from Blogger to Entrepreneur (Signed ed)

**This title is expected in DECEMBER 2022. This preorder will run until 7 Oct, 2022 only. All preorders will be signed!

At the age of thirty-four, I’ve built a nine-figure fashion company, garnered 1.8 million followers on Instagram and managed to squeeze in time to get married and give birth to not one, but four children. And it all started from a blog.

Perfect for young entrepreneurs, this book shares the secrets of my entrepreneurial journey so far – from starting a business with my boyfriend (telling my dad sure was fun), to writing a business plan on a piece of tissue paper, to fundraising, to dealing with competition and to pretending to nod when my tech team talk about cookies.

I share my proud wins for you to get inspired by, and my juicy failures for you to eat popcorn to. Always a work in progress, my story is unfinished. But for now, allow me to present to you, The First Decade.

About the author
Vivy Yusof started blogging about random things and a decade later, has a fashion empire. She co-founded the FashionValet Group in 2010 with her boyfriend and has grown the multi-million dollar company into household names in her country, Malaysia. Her brand dUCk is the largest modest fashion brand in Asia and was the first to collaborate with international brands like Disney, Mattel, Sephora amongst many others. Things went so well that she decided to marry that boyfriend. They now have four kids together and are still in disbelief. A law graduate from London School of Economics, Vivy would have much preferred if she learned software engineering instead. She has been an A-student all her life, and even took her SPM and A-Levels simultaneously, something she would never recommend to others. Vivy Yusof has 1.8 million people following her on Instagram and 247,000 people subscribing to her YouTube channel. She’s not sure why, but she’s ok with it. She has been featured in many local and international publications like Business of Fashion, The New York Times and Forbes. She was also named as one of ‘Forbes 30 Under 30’, and selected as a Young Global Leader by World Economic Forum. Her parents still tell people about that. 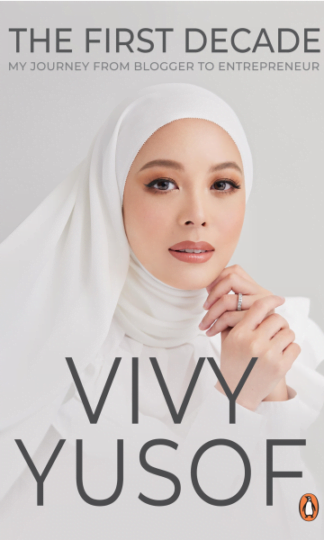 You're viewing: PREORDER: The First Decade: My Journey from Blogger to Entrepreneur (Signed ed) RM79.90
Add to cart
Join Waitlist We'll alert you as soon as the product comes back in stock! Please leave your email address and quantity sought in the fields below.