Protector of the Small Book 2: Page

The second book in the New York Times bestselling series from the fantasy author who is a legend herself: TAMORA PIERCE.

When they think you will fail . . . fail to listen.

As the only female page in history to pass the first year of training to become a knight, Keladry of Mindelan is a force to be reckoned with. But even with her loyal circle of friends at her side, Kel’s battle to prove herself isn’t over yet. She is still trying to master her paralyzing fear of heights and keep up with Lord Wyldon’s grueling training schedule. When a group of pages is trapped by bandits, the boys depend on Kel to lead them to safety. The kingdom’s nobles are beginning to wonder if she can succeed far beyond what they imagined. And those who hate the idea of a female knight are getting desperate—they will do anything to thwart her progress.

More timely than ever, the Protector of the Small series is Anti-Bullying 101 while also touching on issues of bravery, friendship, and dealing humanely with refugees against a backdrop of an action-packed fantasy adventure.

“Tamora Pierce’s books shaped me not only as a young writer but also as a young woman. She is a pillar, an icon, and an inspiration. Cracking open one of her marvelous novels always feels like coming home.”
—SARAH J. MAAS, #1 New York Times bestselling author 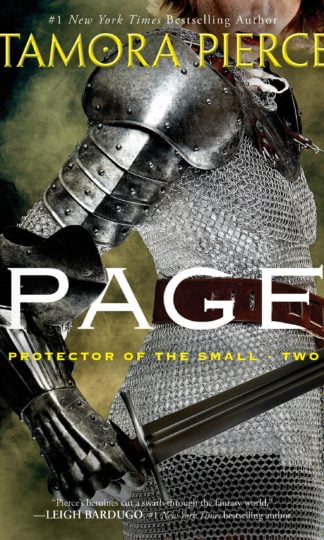 You're viewing: Protector of the Small Book 2: Page RM46.90
Add to cart
Join Waitlist We'll alert you as soon as the product comes back in stock! Please leave your email address and quantity sought in the fields below.