Fly-on-the-wall reporting and palace intrigue worthy of Machiavelli’ John Carreyrou, author of Bad BloodLonglisted for the 2020 Financial Times / McKinsey Business Book of the YearBlood and Oil the explosive untold story of how Mohammed bin Salman and his entourage grabbed power in the Middle East and acquired a network of Western allies – including well-known US bankers, Hollywood figures, and politicians – all eager to help the charming and crafty crown prince. Through astonishing interviews with powerful insiders, Blood and Oil tells how MBS’s cabal played the Saudi economy and capitalised on the omnipotence of feudal power while effectively stamping out dissent, before allegations of his extreme brutality and excess began to slip out. A story of breathtaking dealings that range from Riyadh to London, Paris to America, this is a thrilling and brutal investigation into extreme wealth, one of the world’s most decisive and dangerous new leaders, and the bid for Saudi transformation that is reverberating around the world.

‘This is as close to the truth, to the real story of the corruption, vulgarities, horrors, and lies of the Kingdom and its current despot as we are likely to get. It also can be read as a Shakespearean story of utter greed’ Seymour Hersh, author of Chain of Command 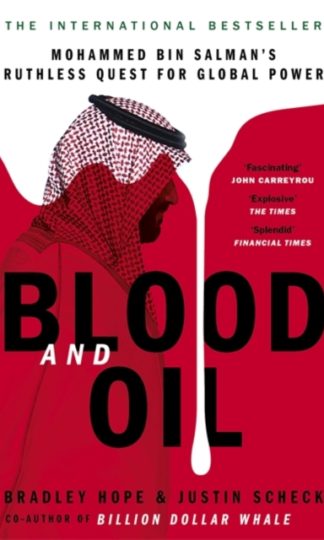 You're viewing: Blood and Oil: Mohammed bin Salman’s Ruthless Quest for Global Power RM72.90
Add to cart
Join Waitlist We'll alert you as soon as the product comes back in stock! Please leave your email address and quantity sought in the fields below.