“The Nicomachean Ethics”, along with its sequel, “the Politics”, is Aristotle’s most widely read and influential work. Ideas central to ethics – that happiness is the end of human endeavor, that moral virtue is formed through action and habituation, and that good action requires prudence – found their most powerful proponent in the person medieval scholars simply called ‘the Philosopher’. Drawing on their intimate knowledge of Aristotle’s thought, Robert C. Bartlett and Susan D. Collins have produced here an English-language translation of the Ethics that is as remarkably faithful to the original as it is graceful in its rendering. Aristotle is well known for the precision with which he chooses his words, and in this elegant translation his work has found its ideal match. Bartlett and Collins provide copious notes and a glossary, giving context and further explanation for students, as well as an introduction and a substantial interpretive essay that sketch central arguments of the work and the seminal place of Aristotle’s Ethics in his political philosophy as a whole.

“The Nicomachean Ethics” has engaged the serious interest of readers across centuries and civilizations – of people ancient, medieval, and modern; pagan, Christian, Muslim, and Jewish – and this new edition will take its place as the standard English-language translation. 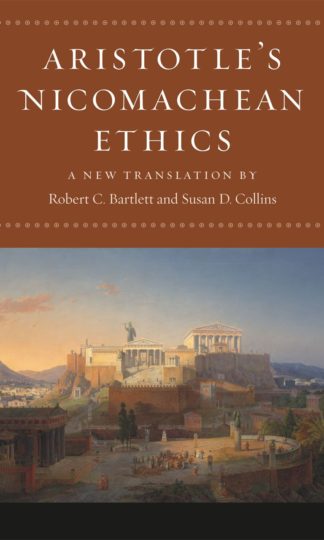 You're viewing: Aristotle’s Nichomachean Ethics RM189.50
Add to cart
Join Waitlist We'll alert you as soon as the product comes back in stock! Please leave your email address and quantity sought in the fields below.